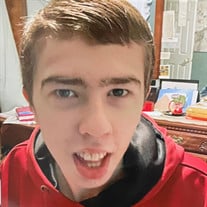 Zane Stephen Hartman, 17, passed away at the Linda E. White Hospice House on Wednesday, October 20, 2021 at 7:45 pm surrounded by his loving family. He was born in Evansville, IN on February 9, 2004 to Paul and Melynda (Libbert) Hartman. Zane was born with several challenges and he was so deeply loved and cared for by his family. Some would say he was a bit spoiled, but he earned that right. His laugh was infectious especially during tickle fights and wrestling around with Dad and his big brother. Although he was nonverbal, he had plenty to say especially with those big brown eyes. He loved kisses and hugs, car rides with Mom while listening to Kenny G, and there wasn't a piece of cake or bowl of chocolate ice cream that he would refuse. He had a special love of the Game Show Network. He attended the lifeskills class at Castle High School. He is survived by his parents, Paul and Melynda (Libbert) Hartman of Newburgh. Brother, Adam Hartman of Newburgh. Grandparents, Lloyd and Judy Libbert of Dale, IN and Gail Hartman of Evansville, several aunts, uncles, and cousins, and many special people who came into our lives and saw beyond his limitations and difficulties and loved him as well. He was preceded in death by his grandfather, Dan G. Hartman. The family would like to thank Riley Hospital for the professional, empathetic care, and patience shown by the doctors, therapists, unit secretaries, and the wonderful nurses and techs on Units 8 East, 9 East, and PICU during Zane's nearly four month stay there. Many thanks to the kind and compassionate staff at the Linda E. White Hospice House who made Zane's last days so peaceful. Thank you to the many friends who kept us in their thoughts and prayers. Lastly, we are so are grateful for Zane's aunts and uncles who were by our side during his last hours giving us so much love and support. Visitation with the family will be held at Ziemer Funeral Home Central Chapel, 626 First Ave., Evansville on Sunday, October 24, 2021 from 3:00 pm -7:00 pm CST with a memorial service at 7:00 pm CST. Funeral services will begin at 8:30 am Monday, October 25, 2021 at the funeral home and continue with a Mass of Christian burial at 9:00 am at St. Benedict Cathedral, 1328 Lincoln Avenue with Father Godrey Mullen officiating. Burial in St Joseph Cemetery. Memorial contributions may be made to Riley Children's Foundation PO Box 3356, Indianapolis, IN 46206-3356, the Ronald McDonald House Charities of Central Indiana 435 Limestone Street, Indianapolis, IN 46202, or Linda E. White Hospice House, 611 Harriet Street, Evansville, IN 47710.

Zane Stephen Hartman, 17, passed away at the Linda E. White Hospice House on Wednesday, October 20, 2021 at 7:45 pm surrounded by his loving family. He was born in Evansville, IN on February 9, 2004 to Paul and Melynda (Libbert) Hartman. Zane... View Obituary & Service Information

The family of Zane Stephen Hartman created this Life Tributes page to make it easy to share your memories.

Send flowers to the Hartman family.