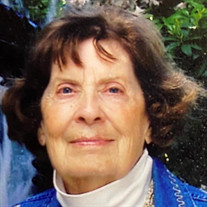 Wilma Geraldine Jones Bunner of Evansville and formerly of Kentucky Lake passed away on March 6, 2021. Wilma was born in Louisville, KY on October 3, 1928 to William Gerald and Mary Benetta (Millay) Jones. She graduated from St. Francis Academy in Owensboro in 1946 and Owensboro Business College and worked at Sears in the credit department. Wilma married Walter Mitchell Bunner on August 14, 1954. She retired as secretary to the principal at Plaza Park Middle School. Wilma was preceded in death by her parents and her husband. She is survived by three children, Patricia (Ken) Colbert of Evansville, Mitchell (Kathy) Bunner of Winter Garden, Florida, and Bruce Bunner of Cebu, Philippines. Grandchildren include Alex Bunner of Newburgh, IN; Liz Bunner of Winter Garden, Florida; Holly Bunner of Mishima, Japan; Remington Colbert of Louisville, KY; and Colton Colbert of Decatur, IL. She is also survived by her three brothers, M. Edward (Cindy Brinker) Jones and Jerry Jones of Evansville, Kenneth (JoAnne) Jones of Tarpon Springs, FL., and sisters, Shirley Ellis and Karen Jones of Owensboro; brother-in-law Ross Riley of Cannelton, IN and many nieces and nephews. Wilma enjoyed traveling, boating on Kentucky Lake, gardening, golf, and music. She was very artistic and loved painting. Wilma had season tickets for both the Evansville Philharmonic Orchestra and the Paducah Symphony Orchestra. She traveled with the Evansville Diocesan Choir to Italy. She also traveled with the Evansville Philharmonic Chorus on trips to England, Ireland, Italy, NW Canada, and Eastern Europe. She continued playing golf until she was 85. She was a charter member of Good Shepherd Catholic Church in Evansville, a member of St. Henry’s Catholic Church in Aurora, KY, and Holy Rosary Catholic Church in Evansville. She was a proud member of DILLIGAS. Wilma was a past president of the Evansville Association of Educational Secretaries. A limited visitation will be on Tuesday, March 9, 2021 from 9:00 am until 10:00 am at Ziemer Funeral Home East Chapel, 800 S. Hebron Ave., Evansville. A Mass of Christian Burial will begin at 10:30 am with Father Bernie Etienne officiating at Holy Rosary Catholic Church, 1303 S. Green River Rd. Burial will be at St. Joseph Cemetery at a later date. A Celebration of Life will take place later in 2021. Expressions of sympathy may take the form of a donation to R. Memorial High School’s music and theater department, 1500 Lincoln Ave., Evansville, 47715.

The family of Wilma Geraldine Bunner created this Life Tributes page to make it easy to share your memories.

Wilma Geraldine Jones Bunner of Evansville and formerly of Kentucky...

Send flowers to the Bunner family.