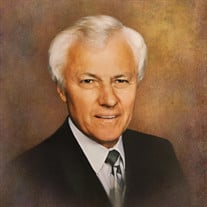 Dr. William George Schmidt passed away on October 8, 2021. He was born in Idaho, December 27, 1923, to the late Agatha “Kate” Schmidt Walker and George Schmidt (who died when Bill was 2) and, a stepfather, Lloyd Walker Sr. Like so many young men of his era, he enlisted at 17 in the Army during WWII where he served in the 97th Infantry Division of the 303rd Regiment. Bill’s unit replacing men at the Battle of the Bulge, traveling over 2000 miles capturing industrial cities and factories throughout Germany and Czechoslovakia, also liberating Flossenburg and Helmbrecht concentration camps. Bill ended his service in Japan just after the bombing of Hiroshima and Nagasaki. Bill used the GI Bill to attain his D.D.S. from St. Louis University in 1951 and his Master in Orthodontia in 1953 as its first graduate. He met the love of his life, Mary Lou Aholt at the nursing school and they moved to Evansville, IN to start an orthodontic practice and raise a family near her hometown of Washington, MO. Their faithful, fun and loving marriage sustained them for over 69 years. Bill’s professional career lasted 35 years. He was honored with SLU Distinguished Service, Dubourg Society and Alpha Sigma Nu Awards. He was a member of the International College of Dentists, the American and Indiana Dental Associations and he was a founding member of Indiana’s first Dental HMO. He genuinely cared for his patients, and they knew it. After retirement he focused on travel with his wife, family, army buddies and dental friends to Israel, cruises to Panama and Alaska, England, Ireland, Italy, Mexico, the Pacific Northwest and the May 10, 2014 Honor Flight to Washington DC. He attended daily mass and volunteered for St. Vincent de Paul, the Legion of Mary Auxiliary, and St. Mary’s hospital greeters. He was most proud of being on the committee that litigated and preserved the St. Mary’s chapel from demolition. He was a life-long member of Christ The King parish and served on many leadership committees, President and Assistant Governor of Serra International, a lay group supporting and encouraging men’s callings to the priesthood, St. Meinrad Oblates, Knights of Columbus and Knights of the Holy Sepulchre, an organization supporting the Christian community in the Holy Lands. He was awarded the Brute’ Award by the Evansville diocese for exceptional dedication to the faith community and stewardship of time, talent and treasure. His hobbies included gardening at his office, home and parish. On weekends he was the grill master and brunch enthusiast. Mulling over gardening and cookbooks during the week and over-filling grocery carts Friday night. He always had a piece of candy to hand to check out clerks and strangers he’d meet along his way to fulfill his nickname “candy man” In addition to his parents, he is preceded in death by his younger brother Lloyd Walker, sister, Margaret Hamilton and his daughter Mary Margaret. He is survived by his wife of over 69 years, Mary Lou Schmidt, Kathryn Ossenberg (Rance), Julia Schmidt Hanson, Christopher Schmidt (Kimbra), Joseph Schmidt, Helen Brown (Jeff), Bill Schmidt (Cara). His 22 grandchildren include: Christine Hanson, Jenny Knight, Ben Hanson, Katie Curran, Wes Brown, Megan Tas, Jessie Hewig, Molly Brown, Hillary Schmidt, Alexa Cortez, Kendyl Schmidt, Emily Folz, Natalie Haskell, Will Schmidt, Hunter, Hank, Walter and Hailey Brown, Melissa Ricks, Alec, Collin and Evan Nelles. His 20 great-grandchildren include: Wyatt, Jack, Joey and Emma Brown, Tristan and Julian Tas, Lane Hewig, Isaac, Jane and Grace Knight, William and Abigail Curran, Charlie Hanson, Jake and Luke Folz, Charlotte and Dawsyn Cortez, Easton, Connor and Addison Ricks. He is also survived by his many nieces and nephews. Visitation will be held at Ziemer Funeral Home East Chapel, 800 S. Hebron Ave., Evansville on Friday, October 15, 2021 from 4:00 p.m.-7:00 p.m. Visitation will continue from 10:30 a.m. - 11:00 a.m. Saturday, October 16, 2021 at Annunciation Parish, Christ the King Catholic Church, 3010 E. Chandler Ave., Evansville with a Mass of Christian Burial at 11:00 a.m. The family would like to express their deepest gratitude to the compassionate care providers Rory Hague, nightly caregivers and Heart to Heart Hospice. In lieu of flowers the family asks that memorials be made to: Annunciation Catholic Parish (Christ The King) www.annunciationevv.org 3010 E. Chandler Ave., Evansville, IN 47714 812-476-3061 Honor Flight of Southern Indiana PO Box 8234, Evansville, IN 47716 www.honorflightssi.org Evansville Wartime Museum www.evansvillewartimemuseum.org Evansville Regional Airport 7503 Petersburg Rd, Evansville, IN 47725 812-424-7461 Condolences may be made online at www.ziemerfuneralhome.com.

The family of Dr. William George Schmidt created this Life Tributes page to make it easy to share your memories.

Send flowers to the Schmidt family.