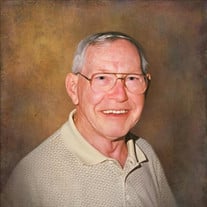 Wilbur D. Keeney, 97, having completed his life journey, passed June 21, 2021 at Magnolia House Assisted Living in Quincy, Florida. WD or Wil, as he was known to most people, was a lifelong Evansville resident who spent his final 4 years in the south closer to his daughter. He was the son of John and Agnes Keeney, and was preceded in death by his parents; his brother, Chester; sister, Dorothy; and his wife of 60 years, Marjorie C. Keeney. He graduated from Central High School and obtained an associate degree from Evansville College, now U of E. He was a veteran of WW2 in the Army Air Force Technical Command repairing air planes. Wilbur was employed by Smith & Butterfield from his late teens to his retirement at age 65. He worked in sales and managed various S&B locations, as needed. He was a long time member of East Side Christian Church serving as Deacon, Elder, on various committees, as well as teaching Sunday school. He had a soft heart for everyone, but especially loved animals, and his dogs were a huge part of his life. He is survived by his daughter, Carolyn J. Stotelmyer, and her companion Lindsey W. Hale, of Bainbridge, GA; his son and daughter-in-law, William D. Keeney and Lisa G. Keeney, of Smithfield, NC; four grandchildren, Christopher S. Stotelmyer, of Atlanta, GA, Jennifer Stotelmyer Bradley, and her husband, Benjamin F. Bradley, of Memphis, TN, Christin J. Keeney, of Raleigh, NC, and Daniel K. Keeney, and his wife, Eason A. Keeney, of Smithfield, NC; and one great granddaughter, Eden E. Keeney. Visitation for friends and family will be from 10:00 AM to 11:00 AM Tuesday, June 29 at Ziemer Funeral Home Central Chapel, 626 N First Ave., Evansville, IN. Funeral services will begin at 11:00 AM and burial will follow at Memorial Park Cemetery. The family would like to extend their deepest thanks to Magnolia House Staff and Covenant Hospice. Memorial contributions may be made to Vanderburgh Humane Society, P.O. Box 6711, Evansville, IN 47719-6711, It Takes a Village Rescue, 1417 N. Stockwell Road, Evansville, IN 47715, or Warrick Humane Society, 5722 S. Vann Road, Newburgh, IN 47630. Condolences may be made online at www.ziemerfuneralhome.com.

Wilbur D. Keeney, 97, having completed his life journey, passed June 21, 2021 at Magnolia House Assisted Living in Quincy, Florida. WD or Wil, as he was known to most people, was a lifelong Evansville resident who spent his final 4 years in... View Obituary & Service Information

The family of Wilbur D. Keeney created this Life Tributes page to make it easy to share your memories.

Send flowers to the Keeney family.