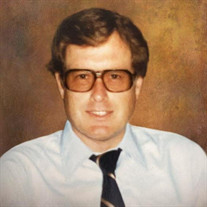 After a brief stay in Deaconess Midtown Hospital, Terry Joe Crane, 83, of Evansville, passed away peacefully Wednesday, March 30, 2022 at the Linda E. White Hospice House. He was born April 15, 1938 in Evansville to the late Thomas M. and Louise (Kreipke) Crane. Terry attended Sacred Heart grade school, and graduated from Mater Dei High School in 1956 where he lettered as the student manager for the Mater Dei wrestling team. He enlisted in the United States Air Force and was honorably discharged after serving as a radar technician at his last duty station, a Cold War early warning radar site on Murphy's Dome, Alaska. Upon returning to Evansville, Terry attended Telletronics Technical Institute to prepare for the Federal Communications Commission's examination for an FCC license, which he felt would further his qualifications for employment in the electronics field. He received his license in 1963 and found employment as a missile component tester with Lockheed-Martin in Sunnyvale, California, and shortly thereafter he assumed a position with United Airlines in Burlingame, CA where he stayed for the remainder of his career; progressing through a variety of responsibilities to his final position as the supervisor of “aircraft electronics and electrical systems maintenance” until his retirement in 2001. Having many close friends who had already moved from the retirement unfriendly area of San Francisco, Terry returned to Evansville to enjoy his retirement among old friends and family, and particularly to be near and assist in the care of his recently widowed mother who was in failing health, which he did with tireless attention for six years until her death in 2007. In addition to his devotion to family and his loyalty to friends, Terry was a gentle person who, although strong of opinion, always respected the opposing opinions of friends and strangers alike and relished a lively discussion with anyone on almost any topic, particularly if it was political. He respected and enjoyed the natural world around him, read voraciously, and had an unquenchable curiosity about all things technical. He was also a very caring man with a soft heart who not only gave generously to worthy causes, but also to his family. We will feel the void he has left and will miss him always. Terry is survived by his brother, Allan Michael (Anne) Crane; sister, Connie (Joe) Schnapf; niece, Holly Schnapf; nephew, Marty Schnapf; great nephew, Zachary End; and great niece, Cecilia End. Terry was preceded in death by his parents. Visitation will be from 11:00 a.m. to 1:00 p.m. Wednesday, April 6, 2022 at Ziemer Funeral Home East Chapel, 800 S. Hebron Avenue. A funeral service will begin at 1:00 p.m. at the funeral home with Sister Mary Mundy officiating. Entombment will be at St. Joseph Mausoleum. Memorial Contributions may be made to the Evansville Rescue Mission, 500 E. Walnut St., Evansville, IN 47713, Doctors Without Borders, USA,, P.O. Box 5030, Hagerstown, MD 21741-5030 or Mercy [email protected] Condolences may be made online at www.ziemerfuneralhome.com.

After a brief stay in Deaconess Midtown Hospital, Terry Joe Crane, 83, of Evansville, passed away peacefully Wednesday, March 30, 2022 at the Linda E. White Hospice House. He was born April 15, 1938 in Evansville to the late Thomas M. and Louise... View Obituary & Service Information

The family of Terry Joe Crane created this Life Tributes page to make it easy to share your memories.

Send flowers to the Crane family.