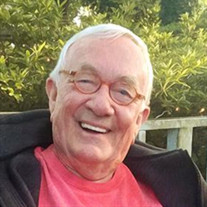 Stephen J. Weber passed on June 22, 2021 with his family by his side. He was 82. Born September 17, 1938, Steve was born and raised in Evansville and attended Bosse High School before heading off to Bloomington for college at Indiana University. While returning home one summer break, Steve asked his best friend Larry whom he was riding with, “What are you gonna do this summer?” The friend replied, “I think I’m going to call on Cindy Tyring.” Having heard that, Steve promptly dropped Larry off at his house then went straight to Cindy’s house and asked for a date. Steve and Cindy got married shortly after and Larry was his best man. All’s well that ends well. Steve and Cindy were married for 52 years. Steve served our country in the Air Force. One of his assignments was in Thule, Greenland where, according to Steve, he was charged with protecting the polar cap and that on his watch the Soviet Union never bombed the United States. Having been a fair to midland golfer and a longstanding member of the Evansville Country Club, Steve may be the only golfer to ever reach number 9 green off the first tee at ECC. He was a member of the Hadi Shrine and participated in numerous Hadi parades, as well as a member of the Imperial Order of the Jesters, the Knights of the Wrong Table and the Indiana Warehousing Association. Following in his father’s footsteps, Steve owned and operated Warehousing, Incorporated for nearly his entire career. He was beloved by everyone that worked with him and was truly a father figure, as well as a friend and boss. Most days you would have found Steve at 4:07 p.m. prompt with his ‘bar trash’ friends at their favorite watering hole. He was always the first to buy a round and always welcomed friends with open arms. Steve is preceded in death by the love of his life, Cindy Tyring Weber. He is survived by his daughter Wendy Weber McCool (Fred), and sons Stephen Ty Weber (Jamie) and Jake Weber (Allyson). He was Papa to his grandchildren, Jesse Weber, Sadie McCool, Riley Weber (Andrew), Annie McCool, Logen Weber, MacKenzie Weber, Lilly Weber, and Grace Weber; great grandchildren, Owen and Dax Porter. He is also survived by his brother, Arthur Weber (Dannie) and his nieces, Becky and Jody. He loved his family dearly. The family would like to extend a special thank you to Walnut Creek, Southern Care Hospice, and Pammie Schraber who provided wonderful care for Steve in the later years of his life. Visitation will be from 4:07 p.m. to 7:00 p.m. Friday, June 25, 2021 at Ziemer Funeral Home Central Chapel, 626 North First Avenue in Evansville. A private service will be held before the visitation. In lieu of flowers, to honor Steve’s generous spirit, please buy a drink for friends or family and cherish the time you have with each other. Condolences may be made to www.ziemerfuneralhome.com.

Stephen J. Weber passed on June 22, 2021 with his family by his side. He was 82. Born September 17, 1938, Steve was born and raised in Evansville and attended Bosse High School before heading off to Bloomington for college at Indiana University.... View Obituary & Service Information

The family of Stephen J. Weber created this Life Tributes page to make it easy to share your memories.

Send flowers to the Weber family.