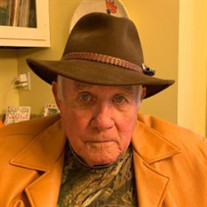 Stephen (“Steve”) Wallace Cook, 82, of Evansville, passed away Wednesday, January 13, 2021, at his home. He was born July 20, 1938, in Evansville to the late Stephen W. and Edith (Newman) Cook. Steve was an owner and operator of the Peter Healey Brass Foundry. While this was a family-owned business, he sold to Gould, Inc., where he worked as a Vice President for three years in Chicago, Illinois. Eager to return to Evansville, Steve moved back home to “God’s Country” to run several other businesses before retiring. Steve was an avid, lifelong hunter and outdoorsman with a passion for Labrador retrievers, waterfowl hunting, and hummingbirds. He was an active member of Central Indiana Lab Rescue & Adoption and loved his many Labrador retrievers. He spent many weekends with his beloved dogs at his cabin at Deer Lake Hollow Farm. He was a good man with strong opinions and had a way of being perplexed when you didn’t agree. There was a sigh and sinking of the shoulders that let you know he didn’t understand. He had a fair sense of right and wrong. He loved Christmas like a kid in a candy store—from the decorating, to the many years of finding the perfect tree from his farm, to the shopping and gift giving, and ending the celebration with a big dinner. In his retirement years he spent even more time hunting and in nature. He also enjoyed traveling with his wife, Sharon, from Alaska to Europe, bringing home good stories to share with his kids. For the past six years, he traveled to Florida each year to see his grandson, Brady Thomas, play football. He loved watching those games. Steve was a true animal lover—in recent years he even found cats to adopt and feral cats to befriend. He was patient with them, just waiting for them to befriend him. Steve passed on his love for animals and nature to his children for which they are grateful. He also enjoyed cooking and even developed some of his own recipes. Steve is survived by his wife, Sharon (Reynolds) Cook; daughters, Catherine (Alex) Corey, Angela (Jason) Thomas, Christine (Bill) Mania; son, Stephen (Tu Ahn) Cook; step-daughters, Kirsten (Tim) Hayden and Stacey (Steve) Coates; step-son, Rob (Laura) Buehner; 15 grandchildren; two great granddaughters; and many nieces and nephews. In addition to his parents, Steve was preceded in death by his sisters, Cynthia Cook Holtzman and Gail Cook Karges. There will be private family services at a later date. Ziemer Funeral Home East Chapel is handling the arrangements. Memorial contributions may be sent to Ducks Unlimited, One Waterfowl Way, Memphis, TN 38120. Condolences may be made online at www.ziemerfuneralhome.com.

The family of Stephen "Steve" Wallace Cook created this Life Tributes page to make it easy to share your memories.

Send flowers to the Cook family.