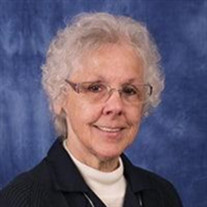 Sister Rita Joyce (Rita Joyce) DiNardo died at St. Vincent Medical Center in Evansville, Indiana on December 11, 2020. Sister was born on June 5, 1940 in Detroit, Michigan and was one of three children of Giulio and Mary (Pesavento) DiNardo. She graduated from High School of Commerce in Detroit in 1959 and entered the Daughters of Charity in Evansville in 1977. After initial formation, Sister Rita Joyce was sent to teach at St. Francis de Sales School in Lake Zurich, Illinois until 1979 when she returned to Evansville to complete a B.S. degree in Elementary Education at Indiana State University. In 1982 she began ministry as a teacher at Cathedral Schools in Natchez, Mississippi and then at St. James Major School in Prichard, Alabama. Sister then was sent to be a Pastoral Care Associate in LaSalle, Illinois and a Music Minister at St. Mary Parish in Natchez, Mississippi. In 2001, she began serving at Eastside Catholic Elementary and Corpus Christi School, both in Milwaukee, Wisconsin. In 2003 she began teaching at St. Vincent Day Care Center in Evansville, Indiana and then served as a secretary in the Vocation Office at Mater Dei Provincialate. She then was a librarian at Providence Hospital and Medical Center in Southfield, Michigan and a Docent at Seton Shrine in Emmitsburg, Maryland. In 2011, she was missioned to St. Vincent Hospital and Health Services in Indianapolis, Indiana until she came to Seton Residence in Evansville in 2014 to serve in the Ministry of Prayer. Burial will be in St. Joseph Cemetery. A memorial Mass will take place at a later date. Sister was preceded in death by her parents and her brother Luigi DiNardo and her sister Cynthia Raciti. She is survived by her nieces and nephews (Carmine, Dean, Lorna, Mark, Ann Marie, Kevin) and their children, her Sisters in Community and many friends. Donations may be made to the Daughters of Charity, 4330 Olive Street, St. Louis, MO 63108. Condolences may be made online at www.ziemerfuneralhome.com.

The family of Sister Rita Joyce DiNardo created this Life Tributes page to make it easy to share your memories.

Send flowers to the DiNardo family.