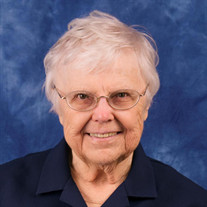 Sister Mary Ann (Mary Ann) Wiltzius died on December 17, 2020 at Seton Residence in Evansville, Indiana. Sister Mary Ann was born on October 8, 1927 in Chicago, Illinois and was the oldest of three children of Lawrence and Mathilde (Rohde) Wiltzius. She graduated from Providence High School, Chicago in 1945 and entered the Daughters of Charity in St. Louis that same year. After initial formation, Sister Mary Ann taught in elementary schools in New Orleans, Louisiana (St. Theresa’s) and St. Louis, Missouri (St. Malachy’s). Sister received a B.A. in History and Philosophy from Fontbonne College in St. Louis and an M.S.W. from St. Louis University. She served as a Social Worker in St. Louis at DePaul Hospital, St. Philomena School, Guardian Angel Settlement and St. Patrick School and at Catholic Social Welfare in Milwaukee, Wisconsin and at Catholic Charities in Covington, Kentucky. Sister Mary Ann was also Administrator at Marillac Social Center in Chicago, Illinois, St. Vincent’s Day Care Center in Evansville, Indiana and St. Mary’s Home in Mobile, Alabama. In 1982, she became the Director of the Recycle Center in Rockport, Illinois and in 1986 she began serving as Parish Minister, Manager and Outreach Worker of Catholic Social Services in Hernando and Olive Branch, Mississippi. From 2000 to 2009, Sister Mary Ann was a Counselor at Our Lady of the Gardens School in Chicago, Illinois. She then went to Nashville, Tennessee to serve as a Receptionist at St. Thomas Hospital for a year and then returned to Marillac Social Center in Chicago as a Volunteer until 2010 when she came to Seton Residence in Evansville to serve in the Ministry of Prayer. Sister Mary Ann will be buried in St. Joseph Cemetery. A memorial Mass will take place at a later date. Sister was preceded in death by her parents and her brothers Lawrence N., Jr. and William J. Wiltzius and she is survived by her sister-in-law, Nancy Wiltzius, nieces and nephews, many friends and her Sisters in Community. Donations may be made to the Daughters of Charity, 4330 Olive Street, St. Louis, MO 63108. Condolences may be made online at www.ziemerfuneralhome.com.

The family of Sister Mary Ann Wiltzius created this Life Tributes page to make it easy to share your memories.

Send flowers to the Wiltzius family.