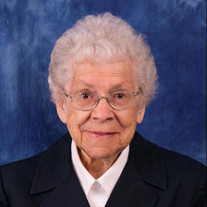 Sister Lucille Marie (Lucille Evelyn) Beauchamp died on December 14, 2021 at Seton Residence in Evansville, Indiana. Sister Lucille Marie was born on May 4, 1922 in Escanaba, Michigan and was one of eleven children of Paul and Isoline (Viau) Beauchamp. She graduated from St. Joseph High School in Escanaba, Michigan in 1940 and entered the Daughters of Charity in St. Louis, Missouri in 1945. After initial formation, Sister Lucille Marie was sent to St. Joseph Hospital in Chicago and received a B.S. in Nursing Education from DePaul University in 1952. Sister served as Nurse Supervisor at St. Thomas Hospital in Nashville, Tennessee and County Hospital in Mobile, Alabama. She received an M.S.N. in Nursing Education Administration from Catholic University of America in Washington, D.C. and served as Director of Nursing Service at St. Mary’s Hospital in Milwaukee, Wisconsin. Sister then ministered at St. Margaret Hospital in Montgomery, Alabama as Dean of Troy University and as Director of Education at St. Vincent Hospital in Birmingham, Alabama. She received certification in Archives and Records Services from Bergamo Center in Dayton, Ohio and the Archives Institute of American University in Washington, D. C. and she served as Archivist at Mater Dei Provincialate in Evansville from 1975 until 1987. Sister then began ministry as Full Time Board Chair at St. Mary Hospital in Milwaukee, Providence Hospital and Medical Center in Southfield, Michigan and St. Vincent Hospital and Medical Center in Indianapolis, Indiana. She also served as Vice Chairman of the Foundation at Providence Hospital in Southfield and as a Foundation Worker at St. Mary Medical Center in Evansville while in the Ministry of Prayer at Seton Residence. Sister was preceded in death by her parents and her brothers Adrian, Hector and Leo Beauchamp and her sisters Blanche Wright, Eva Marie Sharkey, Marie Myers, Alyce Hanley, Genevieve Connaughton, Joan Pisker and Lorrayne Laas and she is survived by many nieces and nephews, her Sisters in Community, and many friends. A Wake Service will be held on Saturday, December 18, at 9:30 a.m. in the Seton Residence Chapel and the Mass of Christian Burial will be at 11:00 a.m. Burial will then take place in St. Joseph Cemetery. Donations may be made to the Daughters of Charity, 4330 Olive Street, St. Louis, MO 63108. Condolences may be made online at www.ziemerfuneralhome.com.

Sister Lucille Marie (Lucille Evelyn) Beauchamp died on December 14, 2021 at Seton Residence in Evansville, Indiana. Sister Lucille Marie was born on May 4, 1922 in Escanaba, Michigan and was one of eleven children of Paul and Isoline (Viau)... View Obituary & Service Information

The family of Sister Lucille Marie Beauchamp created this Life Tributes page to make it easy to share your memories.

Send flowers to the Beauchamp family.