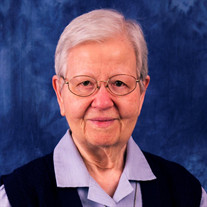 Sister Michael (Isabella Helen) Friebe died on March 30, 2022 at Seton Residence in Evansville, Indiana. Sister Michael was born on March 16, 1922 in Smithville, Texas and was one of eight children of Herman F. and Othelia (Meuth) Friebe. Sister graduated from Smithfield High School in 1940 and entered the Daughters of Charity in St. Louis, Missouri in 1942. After initial formation, Sister Michael was sent to St. Joseph Hospital in Chicago to begin her education as a nurse. She then served as Head Nurse and Supervisor at Charity Hospital and Hotel Dieu Hospital in New Orleans, Louisiana, Seton Hospital in Austin, Texas, Mary’s Help Hospital in San Francisco and O’Connor Hospital in San Jose, California and at the National Hansen’s Disease Center in Carville, Louisiana. Sister received a BSNE in Nursing Education from Louisiana State University in New Orleans and a Chaplain/NACC Certificate and Clinical Pastoral Education from Providence St. Margaret Health Center in Kansas City, Kansas and the U.S. Catholic Conference. In 1972, Sister Michael began her ministry in Pastoral Care and Chaplain Services in hospitals in New Orleans, Louisiana, Kansas City, Kansas and Dallas, Austin and Waco, Texas until 2009 when she came to Seton Residence to serve in the Ministry of Prayer. A Wake Service will be held at 10:00 a.m. in the Seton Residence Chapel followed by the Mass of Christian Burial at 11 a.m. on Friday, April 8. 2022. Ziemer Funeral Home Central Chapel, 626 N. First Avenue, Evansville, IN 47710 is handling the arrangements. Burial will be in St. Joseph Cemetery. Sister was preceded in death by her sisters Irene Lehman, Henrietta Beck, Edna Pallamallo and Josephine Kreitz and her brothers, James, Eugene and Alfred Friebe and she is survived by beloved nieces and nephews, her Sisters in Community and many friends. Donations may be made to the Daughters of Charity, 4330 Olive Street, St. Louis, MO 63108. Condolences may be made online to www.ziemerfuneralhome.com.

Sister Michael (Isabella Helen) Friebe died on March 30, 2022 at Seton Residence in Evansville, Indiana. Sister Michael was born on March 16, 1922 in Smithville, Texas and was one of eight children of Herman F. and Othelia (Meuth) Friebe.... View Obituary & Service Information

The family of Sister Michael Friebe, D.C. created this Life Tributes page to make it easy to share your memories.