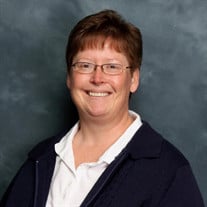 Sister Brenda (Brenda Mary) Monahan died peacefully on February 28, 2021 at Seton Residence in Evansville, Indiana. Sister Brenda was born on May 23, 1964 in Wildwood, New Jersey and was one of four children of Elizabeth (Ryan) and Michael Monahan. Sister graduated from Tallassee High School in Alabama in 1982 and received a BS in Elementary Education from the University of Montevallo in Montevallo, Alabama in 1986. She entered the Daughters of Charity in Evansville, Indiana on June 29, 1991. After initial formation in Emmitsburg, Maryland, Sister Brenda began her ministry in education in Pritchard, Alabama as a teacher and principal. During this time, she also earned her M.A. in Educational Leadership from the University of Dayton, Ohio. In 2003, Sister was missioned to St. Therese School in Jackson, Mississippi to serve as principal of the school until 2009 when she went to Chicago, Illinois to participate in the Vincentian Integration Experience (VIE). In 2010, Sister returned to Alabama as Principal of St. Barnabas School in Birmingham and later as Director at Beacon of Hope, Inc. In 2014, Sister Brenda began her ministry as principal of Mother Seton School in Emmitsburg, Maryland until 2019 after which she was missioned to San Antonio, Texas and was asked to serve as Mission Coordinator for Sponsored Works of the Daughters of Charity until she came to Seton Residence in Evansville, Indiana to serve in the ministry of prayer until the time of her death. On Saturday, March 6, a Wake Service will be held in the Chapel at Seton Residence at 10:00 a.m., followed by the Mass of Christian Burial at 11:00 and burial in St. Joseph Cemetery. Sister Brenda was preceded in death by her parents, brother-in-law Vernon Stabler and sister-in-law Nati Monahan, and she is survived by her sister, Patricia Lee Stabler and her brothers Michael David and William John (and wife Kellie) Monahan, nieces Alexandria Monahan and Shannon Sayler (and husband Matthew) great-niece Lorelei, great-nephew Caspian and nephews Mitchell and John Monahan, as well as her Sisters in Community and many friends. Donations may be made to the Mother Seton School Scholarship Fund, 100 Creamery Road, Emmitsburg, Maryland 21727. Condolences may be made online at www.ziemerfuneralhome.com

Sister Brenda (Brenda Mary) Monahan died peacefully on February 28, 2021 at Seton Residence in Evansville, Indiana. Sister Brenda was born on May 23, 1964 in Wildwood, New Jersey and was one of four children of Elizabeth (Ryan) and Michael... View Obituary & Service Information

The family of Sister Brenda Monahan created this Life Tributes page to make it easy to share your memories.

Send flowers to the Monahan family.