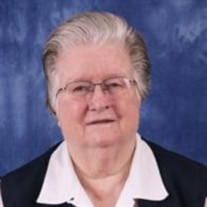 Sister Bernadette (Mary Bernadette) Forquer died on November 29, 2020 at Seton Residence in Evansville, Indiana. Sister Bernadette was born on February 1, 1933 in Santa Monica, California and was one of two children of William J. and Dorothy (Dahle) Forquer. Sister graduated from Bishop County High School in Los Angeles, California and entered the Daughters of Charity in St. Louis, Missouri in 1952. After initial formation, Sister Bernadette was sent to teach at St. Anne School in Dallas, Texas until 1965 when she moved to Chicago, Illinois to minister as a Nursery/Pre-School Teacher at DePaul Settlement. Sister also served as a Receptionist at St. Vincent de Paul Senior Services in Chicago until 1979 when she was missioned to Catholic Social Services in Hernando, Mississippi. She received a Fine Arts degree from La Salle Extension University in Chicago. Sister was sent to Huntingburg, Indiana to serve at St. Mary’s Parish until 1988 when she began her ministry as an Outreach Worker and Shop Coordinator for Catholic Charities in Effingham, Illinois and as a Parish Outreach Worker at St. Anthony of Padua Parish. From 2003 to 2011, Sister Bernadette ministered as a Driver for the Sisters at Seton Residence and as Hospitality Coordinator for Mater Dei Provincialate in Evansville until she began her service in the Ministry of Prayer at Seton Residence. Sister Bernadette will be buried in St. Joseph Cemetery and a Memorial Mass will take place at a later date. Sister was preceded in death by her parents and is survived by her sister Lenore (Dottie) Simonsen in Lacy, Washington, her Sisters in Community and many friends. Donations may be made to the Daughters of Charity, 4330 Olive Street, St. Louis, MO 63108. Condolences may be made online at www.ziemerfuneralhome.com.

Sister Bernadette (Mary Bernadette) Forquer died on November 29, 2020 at Seton Residence in Evansville, Indiana. Sister Bernadette was born on February 1, 1933 in Santa Monica, California and was one of two children of William J. and Dorothy... View Obituary & Service Information

The family of Sister Bernadette Forquer created this Life Tributes page to make it easy to share your memories.

Send flowers to the Forquer family.