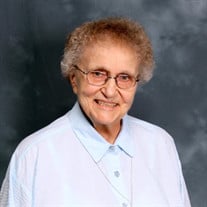 Sister Anthony (Alice Therese) Prugger died at Seton Residence in Evansville, Indiana on January 3, 2021. Sister Anthony was born on December 7, 1925 in Milwaukee, Wisconsin and was one of two children of Anthony A. and Theresa (Schaefer) Prugger. Sister graduated from Pius XI and St. Joseph’s School in 1943 and earned a Ph.B. in Sociology from Marquette University in Milwaukee in 1946 and entered the Daughters of Charity in St. Louis in 1949. After initial formation, Sister Anthony was sent to St. Joseph Hospital in Chicago, Illinois and earned certification as an RN in 1953 and an M.S.W. in Psychology and Social Work from Loyola School of Social Work in Chicago in 1961. She also received a certificate in Pastoral Studies from Loyola Institute for Ministry in New Orleans, Louisiana. Sister served as a nurse and social worker at St. Vincent Infant Hospital in Chicago until 1970. Her next assignment was that of Elderly Outreach Worker at DePaul Settlement in Chicago until 1975. For the next two years Sister Anthony was Administrator of Seton Residence in Evansville, Indiana. She then went to Farmington Hills, Michigan as Administrator of St. Vincent/Sarah Fisher Center until 1984 when she returned to Evansville to serve as Vocation Director and Planning Consultant at St. Mary Residence and Mater Dei Provincialate until 1991. Sister Anthony then moved to Seton Residence where she served as Coordinator of the Retirement Program, Administrator, Assistant to the Sister Servant and in the Ministry of Prayer until the time of her death. Sister Anthony will be buried in St. Joseph Cemetery and a memorial Mass will take place at a later date. Sister is survived by her sister Marilyn Lofiego , nieces and nephews, her Sisters in Community and many friends. Donations may be made to the Daughters of Charity, 4330 Olive Street, St. Louis, MO 63108. Condolences may be made online at www.ziemerfuneralhome.com.

Sister Anthony (Alice Therese) Prugger died at Seton Residence in Evansville, Indiana on January 3, 2021. Sister Anthony was born on December 7, 1925 in Milwaukee, Wisconsin and was one of two children of Anthony A. and Theresa (Schaefer)... View Obituary & Service Information

The family of Sister Anthony Prugger created this Life Tributes page to make it easy to share your memories.

Send flowers to the Prugger family.