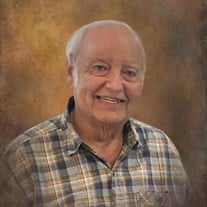 Russell Jesse Starkey, 78, of Jasper, passed away Monday, December 27, 2021 at the Linda E. White Hospice House. He was born July 1, 1943 in Evansville, Indiana to the late Jesse Alva and Joyce (Crowe) Starkey. Russell graduated from North High School in 1961 and Ivy Tech. He started his career with Risley’s and Julian and retired in 2006 after 46 years at Kimball Electronics in Jasper, Indiana. He was a member of Faith Community Church of the Nazarene in Huntingburg, Indiana. Russell enjoyed working on, and restoring, wire recorders. He had a special knack for repairing televisions and old electronics. Russell is survived by his wife, Priscilla (Wagner) Starkey; sons, David Starkey (Kim), Steven Starkey (Jennifer), and Robert Starkey (Kayla); grandchildren, who affectionately called him Sugar Pops, Anna, Adalyn, Sarah, Aubrey, Lauren, and Rohan Starkey; brother Ralph Starkey (Janice); nieces and nephews. In addition to his parents, Russell was preceded in death by his brother Richard Starkey and sister, Martha Jean Hasty. Visitation will be from 10:00 a.m. to 1:00 p.m. Thursday, December 30, 2021 at Ziemer Funeral Home East Chapel, 800 S. Hebron Ave., Evansville. Funeral services will begin at 1:00 p.m. at the funeral home with Reverend William Covey officiating. Burial will be at Rose Hill Cemetery, Newburgh, Indiana. Memorial contributions may be made to Faith Community Church of the Nazarene, 406 E. 3rd St., Huntingburg, IN 47542. Condolences may be made online at www.ziemerfuneralhome.com.

The family of Russell Jesse Starkey created this Life Tributes page to make it easy to share your memories.

Send flowers to the Starkey family.