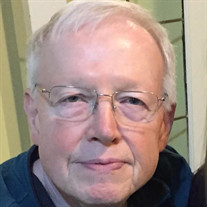 Russell “Wayne” Matthews, 71, of Newburgh, Indiana, passed away at home on September 12, 2021 after a terminal illness. Wayne was born July 19, 1950 in Owensboro, Kentucky to Carol Canary Matthews and the late Walter Russell Matthews. Wayne had a happy childhood, along with his brother, Bobby, and their cousins. He graduated from Owensboro High School and went on to earn a degree in computer science from ITT Technical Institute. After marrying Lucy Rose Peter, Wayne and his bride moved to Newburgh, residing there together for over 40 years. Wayne had a long career in the information technology field, serving as a computer programmer, systems analyst, and in other roles with complicated names reflective of Wayne’s great analytical and technical skill. He retired from Springleaf Financial in 2015. Wayne’s interest included coaching youth sports, playing golf, and playing board games with family and his many friends. He loved dogs, remote controlled vehicles (be it car, truck, or drone) and sticking to his guns (some would say determined, while others would say stubborn). He was a solid supporter of Indiana University (despite angst from his family across the Ohio River). In his later years, he participated in Rock Steady Boxing and lost many rounds of Uno to his granddaughter. Wayne was happiest with his family. He is survived by his wife Lucy (Peter) Matthews, son Scott, daughter-in-law Amy, granddaughter Elizabeth, mother Carol, brother Bobby, sister-in-law Flora, and a large extended family including beloved sisters-in law, brothers-in-law, nieces, nephews, aunt, and cousins. Wayne is preceded in death by his father, Walter Russell Matthews, and his daughter, Katie Matthews. Visitation will be held from 2:00 p.m. to 8:00 p.m. at Ziemer Funeral Home East Chapel, 800 S. Hebron Ave. Evansville, 47715, Wednesday, September 15, 2021. A gathering will continue from 9:30 a.m. to 10:00 a.m. Thursday, September 16, 2021 at St. John the Baptist Catholic Church in Newburgh, Indiana, with a Mass of Christian Burial to follow at 10:00 a.m., with Father Claude Burns officiating. Due to the pandemic masks will be required and social distancing will be observed. The funeral will be livestreamed through the St. John the Baptist website at the following link: https://video.ibm.com/channel/D5DRejAmUkH. Burial will follow at St. John’s Cemetery in Newburgh. In lieu of flowers, please direct memorial contributions in Wayne’s name to the Warrick County Humane Society, 5722 S. Vann Rd. Newburgh, IN 47630. Condolences may be made online at www.ziemerfuneralhome.com.

The family of Russell "Wayne" Matthews created this Life Tributes page to make it easy to share your memories.

Send flowers to the Matthews family.