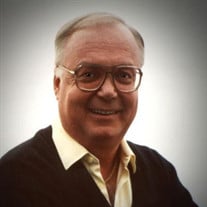 Rudy Thomas Stieler, 86, of Evansville, IN, passed away on December 30, 2020 after a debilitating stroke. Rudy was born on September 11, 1934 to Marie (Shields) and Rudolph A. Stieler in Evansville. After graduating from St. Benedict Cathedral School and Memorial High School, he went on to study business at Purdue University and the University of Evansville. After a brief time in the military service in the 101st Airborne, he landed his first job as vice president for S. S. Kresge Company. From there he moved on to Union Federal Savings and Loan, where he worked for the next thirteen years. He found his niche, however, when he started work at the Guthrie May Company, where he launched a career in real estate and development. After several years with Guthrie May, he founded Stieler Development with W.C. (Bud) Bussing and then continued the business on his own as developer and builder for numerous projects, including 1500 apartment units, several restaurant franchises, and three ShowPlace Cinema theaters for his brother, Paul Stieler. In 1955, Rudy married Glenda (Bloodworth), and together they had three children: Lisa Marie, Julie Anne, and Tressa Rose. Glenda passed away in 1963 after a battle with cancer. In 1965, he married Suzanne Sursa; they added John Jason and Matthew Thomas to the family. His love of family brought gratitude and joy to his heart. Rudy appreciated meeting people and learning different cultures, and he was blessed to have traveled to 33 different countries over the years. Rudy was also a life-long baseball fan. Having pitched for Memorial High School, the University of Evansville, and the Rockport IK Leagues, he enjoyed watching his beloved New York Yankees and St. Louis Cardinals, preferably on the sunporch and with a large bowl of ice cream. Rudy is survived by his wife, Suzanne Stieler; his children, Lisa Stieler, Julie (Steve) Karger, Tressa Stieler, Jason Stieler, and Matt Stieler; his grandchildren, Matthew Graham (Kim) Rohrer, Nathan and Michael Renschler, Lance Johann, Meghan Wiggins, Alex Goodson, and Mason Stieler; his great-grandchildren, Gavin and Noah Rohrer and Lyllian and Silas Renschler; and his sister, Rosemarie Gilles. He is predeceased by his first wife, Glenda Bloodworth Stieler; his parents, Marie and Rudy A. Stieler; his brother, Paul Stieler, and grandson, Shawn Smith. Private services were held on Saturday, January 2, 2021 at Ziemer funeral Home East Chapel. Memorial contributions may be made Riley Children’s Hospital, 705 Riley Hospital Dr., Indianapolis, IN, 46202, or a favorite charity. Condolences may be made online at www.ziemerfuneralhome.com.

Rudy Thomas Stieler, 86, of Evansville, IN, passed away on December 30, 2020 after a debilitating stroke. Rudy was born on September 11, 1934 to Marie (Shields) and Rudolph A. Stieler in Evansville. After graduating from St. Benedict Cathedral... View Obituary & Service Information

The family of Rudy Stieler created this Life Tributes page to make it easy to share your memories.

Rudy Thomas Stieler, 86, of Evansville, IN, passed away on December...

Send flowers to the Stieler family.