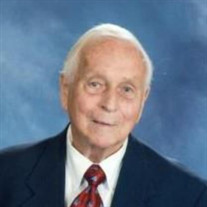 Ronald Barry Lankford, 87, of Newburgh, Indiana passed away, Tuesday, December 8, 2020 at Primrose Retirement Community of Newburgh with his son, Brian S. Lankford, at his side. He was born September 23, 1933 to Albert B. and Fannie C. (Stitt) Lankford in Evansville. Ron attended the two-room Burkhardt Grade School on Evansville’s east side and graduated from Bosse High School in 1951. In 1955, Ron married Leona F. Riedford, a farm girl from Haubstadt, and enjoyed 60 years of marriage before her death in 2016. Ron began his banking career at Old National Bank in Evansville as a paying and receiving teller in 1956. At that time, Old National had only four offices, all in Vanderburgh County. Ron continued his education at Evansville College while working full time and later earned a degree from the Graduate School of Banking in Madison, Wisconsin. Ron rose thru the ranks at Old National from Assistant Manager at several branch locations to Branch Manager and then on to Senior Vice President and Branch Administrator. In 1989, Old National promoted him to CEO of Security Bank of Vincennes, IN (an affiliate of Old National Bancorp). In 1994, Ronald B. Lankford was named President and Chief Operating Officer of Old National Bancorp in Evansville. He retired December 31, 1999. At that time, the bank had 2,200 employees in four states under Ron’s leadership. He was very proud of his 45 year career with Old National Bank. He had the respect of business leaders in the community as well as his loyal bank customers, Old National Bank employees, family and friends. Ron was a certified law enforcement firearms instructor having trained the Evansville SWAT team. He received several Outstanding Citizen Awards from the Evansville Police Department. He was named an honorary Lieutenant Colonel by the Indiana State Police. He also worked closely with the Vanderburgh County Sheriff’s department, FBI and Secret Service on their firearms training programs. Ron received a personal letter from President Ronald Reagan and Vice President George Bush thanking him for his assistance to the Secret Service on their 1986 visit to Evansville. Ron and Leona were comfortable at a gala black tie event as well as hiking on weekends with friends in Warrick County. Ron, Leona and Brian traveled extensively world-wide. They white-water rafted in the Arctic National Wildlife Refuge. Climbing to 12,000 feet of Mt. Everest in Nepal was a favorite as well as backpacking over the Austrian Alps and parts of the Appalachian Trail in the eastern United States. In later years, they were part of a group of travelers to Russia, Eastern Europe, Vietnam, Australia, South America and Africa. Ron is survived by his son, Brian S. Lankford, of Evansville. In addition, he is survived by several cousins, as well as his extended family on his wife’s side. He is survived by his brother-in-law, Bernard Riedford, and two sisters-in-law, Bernadette Pohl and Wilma Riedford; 24 nieces and nephews; his childhood friends, Carl Schofield and Charles Ubelhor who were like brothers to him and visited him faithfully while he was at Primrose; and he is survived by his entire Old National Bank family who supported him throughout his career. Ron was a member of Good Shepherd Catholic Church in Evansville. At his request, the services were private and were held on Wednesday, December 9, 2020 with Reverend Zach Etienne officiating. Burial was at St. Joseph Catholic Cemetery in Evansville, Indiana. Care was entrusted to Ziemer Funeral Home. The family would like to thank Primrose Retirement Community of Newburgh Memory Care, Home Instead, Southern Care Hospice, and Visiting Angels for their compassionate care the last two years. Memorial contributions may be made to Good Shepherd Catholic Church endowment 2301 N. Stockwell Road, Evansville, Indiana 47715. Condolences may be made online at www.ziemerfuneralhome.com.

Ronald Barry Lankford, 87, of Newburgh, Indiana passed away, Tuesday, December 8, 2020 at Primrose Retirement Community of Newburgh with his son, Brian S. Lankford, at his side. He was born September 23, 1933 to Albert B. and Fannie C. (Stitt)... View Obituary & Service Information

The family of Ronald Barry Lankford created this Life Tributes page to make it easy to share your memories.

Send flowers to the Lankford family.