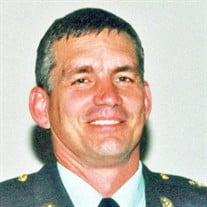 Rod Jackson, a former Green Beret and Evansville business owner whose love of children motivated him to move to Honduras for volunteer work at an orphanage, died in Honduras Tuesday, Feb. 1, 2022. He was 58. Rodney Scott Jackson was born in Paris, Texas, on April 10, 1963. His family moved to Evansville two months later, and Rod spent much of his life here. After graduating in 1981 from Harrison High School where he played football and ran track, he joined the Army and earned entry into the elite Special Forces. He advanced to the rank of master sergeant during a 20-year active and Reserve career. Two sons followed him into military service. He returned to Evansville after leaving active duty – which included training the military in Honduras – and studied engineering at the University of Southern Indiana. After working in industry for a few years, Rod and his partners purchased in 1997 controlling shares in QTR, a local plastics recycling company. He was eligible to retire from the Army Reserve at the time of the 9/11 attack on America four years later but chose instead to take a leave from his responsibilities at QTR and volunteer for an active-duty tour in war-torn Iraq. When he returned, he led QTR to an increase in sales to $15 million and oversaw construction of a new 67,000-square-foot building to house the growing company. In 2006, the Indiana Chamber of Commerce named QTR the Small Business of the Year. QTR was sold in 2010. Later, Rod moved to Honduras and established a new life there while volunteering at an orphanage in the Trujillo region. His work at the orphanage spanned everything from creating a septic system to installing solar panels to make the center independent of the unpredictable electrical system. He paid most of the costs of the projects himself. But it was the children who made his efforts meaningful. He loved them all, and they returned his love in abundance. Any visit by “Rodrigo” was a special day at the orphanage. His love for children led him to coach several soccer and football teams while he was living in Warrick County. He was president of a football league at one time. A strong Catholic, he taught Confirmation classes both here and in Honduras. He also found time to serve as a firefighter and diver for the Knight Township Fire Department. Rod was a patriot, a brave man with a giving heart. No appeal from his church or from friends or family would be ignored. In Honduras, a request by a visiting priest led to Rod initiating construction of the first Catholic Church in his small community. He paid for the materials and did much of the labor himself. He also performed the electrical work for an apartment complex for priests in the area and assisted a second orphanage with electrical services. He lived his life serving others. He gave so much to so many. That is his legacy. He is survived by daughters Sara, Kelsi Cobb (Abram), and Anna Haggard (Jonny), all of Newburgh, and Katie McCleary (Travis) of Fort Wayne; sons Adam (Elizabeth) of Nashville, Bryan of Newburgh, and Jon Ryan of Honduras; brothers Kerry (Teran) of Newburgh and Ryan (Sharon) of Naples, FL; sister, Kimberly Jackson of Indianapolis; parents, Bill Jackson (Jill) of Evansville and Alice Jackson of Williston, FL; wife, Wendy of Honduras; and several grandchildren. A funeral for Rod was held in Honduras on Wednesday, Feb. 2, 2022. Citizens of Mojaguay, honoring his contributions to the orphanage and the community, plan to enshrine Rod’s body to lie in the church he built. A memorial Mass is scheduled for 10 a.m. Saturday, Feb. 12, 2022, at Holy Rosary Catholic Church, 1301 S. Green River Road in Evansville. Father Bernie Etienne will preside. Visitation will be from 9 a.m. to Mass time. Condolences may be made online at www.ziemerfuneralhome.com.

Rod Jackson, a former Green Beret and Evansville business owner whose love of children motivated him to move to Honduras for volunteer work at an orphanage, died in Honduras Tuesday, Feb. 1, 2022. He was 58. Rodney Scott Jackson was born in... View Obituary & Service Information

The family of Rod Jackson created this Life Tributes page to make it easy to share your memories.

Send flowers to the Jackson family.