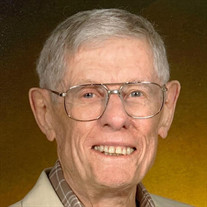 Robert August “Bob” Wessel, 89, of Evansville, passed away Monday, February 1, 2021 at River Pointe Health Campus with his wife, Judy, and daughter, Beth, at his side. He was born March 12, 1931 in Evansville to the late Fred and Minnie (Willingham) Wessel. A 1949 Central High School graduate, Bob served in the US Army during the Korean War. He earned a Bachelor of Science Degree in Education from Evansville College in 1958, and later earned a Master’s Degree in Education from Indiana University. Bob loved teaching history and social studies. He spent the majority of his career (40 years) at Bosse High School in Evansville. In 1990, Bob received an award from the Indianapolis Star after being nominated by former student, Sean Connolly, as the teacher who most influenced his academic career, “Mr. Wessel’s enthusiasm for learning is unmatched; he demands similar dedication from his students. His method showed a deep respect for individual freedom; our discussions were open to all viewpoints, and everyone learned to be prepared to defend his or her opinion. When students asked about areas in which his knowledge was limited, he admitted it. Moreover, Mr. Wessel confronted a challenge often presented by today’s brightest students: he insisted that apathy was inexcusable, and that gifted students should devote as much energy to learning s those who struggle. Mr. Wessel has influenced the very core of my beliefs. Further, I commit myself to his belief that intellectual ability carries the weighty responsibility of protecting the human intelligence’s continual search for truth from mankind’s powerful urge to conform.”. Bob delighted in seeing former students and learning about their lives. After retirement, Bob stayed very active socially and was an avid volunteer. The many organizations to which he gave his time included; the LST 325 Ship Memorial, St. Mary’s Hospital, Mesker Park Zoo, Holy Rosary Church, Veterans for Peace, Germania Meannerchor Men’s Choir, as well as, numerous other organizations. He also enjoyed meeting friends at the Friday Morning Breakfast Club, walking with friends at the mall and keeping in touch with his SAE brothers. However, his favorite days were those he shared with “his girls”. Bob married Judith Gerard in September 1958 and they were blessed with a beautiful daughter in July 1963. “Bethie” immediately became the center of their lives as they watched her grow into a beautiful lady. Beth was fortunate to accompany Bob on Honor Flight EVV 9 in November 2018, it was a fun trip and beautiful memory for both. Bob and Judy enjoyed visiting historical sites and traveling with friends. Bob was an avid reader of history and politics and kept up with current affairs through his final days. Bob is survived by his wife of 62 years, Judith (Gerard) Wessel; daughter, Beth (Mark) Prosser of Greensboro, GA; granddaughters, Sara (Nick) Davis of Plano, TX, Erin (Jordan) Maher of Lexington, KY and Ally Prosser of Bentonville, AR; great grandson, Parker Davis; brother and sister-in-law, Gary and Mary Ellen Gerard of New Harmony, IN; sister-in-law, Nancy Gerard of Austin, TX; and nieces and nephews. In addition to his parents, he was preceded in death by his brother, Fred Wessel, Jr.; nephew, Mark Wessel; brother and sister-in-law, Michael and Deanna Gerard; and brother-in-law, David Gerard. Due to the pandemic, services will be private. Service will be live streamed on Ziemer Funeral Home and Cremation Facebook page at 10:00 am (CST) Saturday, February 6, 2021 with Father Bernie Etienne officiating. Entombment will be at St. Joseph Cemetery. A celebration of a life well lived will be held at a later date. The family would like to thank Dr. Karl Sash and Dr. Thomas Waits and their wonderful staffs, with a special thanks to Shannon, the staff at River Pointe that cared for Bob in his final days and Heart to Heart Hospice, an amazing organization. Another special thanks to Debbie and Kayla and all of the above who gave compassionate care, support and love to Bob and Judy. We will never forget what you have done for us. In lieu of flowers, memorial contributions may be made to the USS LST Ship Memorial, 610 NW Riverside Dr., Evansville, IN 47708, Veterans for Peace, PO Box 5725, Evansville, IN 47716 or Heart to Heart Hospice, 2532 Waterbridge Way, Evansville, IN 47710.

The family of Robert August Wessel created this Life Tributes page to make it easy to share your memories.

Send flowers to the Wessel family.