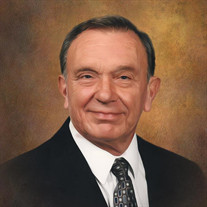 Richard (Dick) Harold Klausmeier, 92, of Greenwood, IN, passed away January 12, 2022. He was born January 6, 1930, in Evansville, to the late Edward and Louise (Ulrich) Klausmeier. Dick was a 1948 graduate of Memorial High School. He was a veteran of the US Army and served in the Korean War. On November 22, 1958, he married MaryAnn Eger. She preceded him in death in 1995. He retired from Gribbins Insulation where he worked as an Estimator. Dick was a member of St. Joseph Catholic Church for sixty years and participated on various committees, served as a lector, and was active in the Christian Family Movement. His wife, his family, and his church community were the center of his life. Dick will be remembered for his quick wit, bright mind, sense of humor, patience, abundant tomato crops, love of nature, knowledge of birds, and his poetry writing skills. He enjoyed traveling with his family, piddling in his garden or garage, reading novels, working crossword puzzles, playing cards, and dancing the jitterbug at the occasional weddings. He was happiest when he was surrounded by his family, especially his grandchildren whom he loved dearly. Dick is survived by his daughters, Anne Wolf (Dave) and Kathy Couture (Jeff); sons, Thomas Klausmeier (Shellee) and Daniel Klausmeier (Pilar); brother, Alan Klausmeier (Kay); grandchildren, Andrea (Walt) Burggrabe, Joseph (Kylie)Wolf, Alex Couture, Adam Wolf, and Mia Couture; and great grandchild, Rosetta Wolf. In addition to his parents and his wife, Dick was preceded in death by his brother, Robert Klausmeier. Visitation will be on Friday, January 21 from 4:00 to 7:00 p.m. at Ziemer Funeral Home North Chapel, 6300 N. First Ave, Evansville, IN where a Memorial service will be held at 6:30 p.m. Visitation will continue on Saturday, January 22 from 10:00 to 11:00 a.m. at Saint Joseph Catholic Church, 6202 W St. Joseph Rd. A Mass of Christian Burial will take place at 11:00 a.m. with Father Gene Schroeder officiating. Burial will be at St. Joseph Catholic Church Cemetery. Memorial contributions may be made to Saint Joseph Catholic Church, 6202 W. St. Joseph Rd., Evansville, IN 47720 and the National Audubon Society, Attn: Donations, 225 Varick St., 7th Floor, New York, NY 10014. Condolences may be made online at www.ziemerfuneralhome.com.

Richard (Dick) Harold Klausmeier, 92, of Greenwood, IN, passed away January 12, 2022. He was born January 6, 1930, in Evansville, to the late Edward and Louise (Ulrich) Klausmeier. Dick was a 1948 graduate of Memorial High School. He was a... View Obituary & Service Information

The family of Richard "Dick" Harold Klausmeier created this Life Tributes page to make it easy to share your memories.

Send flowers to the Klausmeier family.