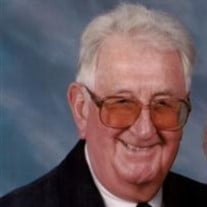 Raymond F. Pritchett, 89, of Evansville, passed away Tuesday, April 27, 2021 at his home. He was born May 3, 1931 in Evansville to the late Alvera (Tenbarge) and Raymond U. Pritchett. Ray grew up on West Illinois Street and attended Holy Trinity Catholic School where he formed lifelong friendships, with regular lunch meetups well into his 80’s. He graduated from Memorial High School in 1949 and enlisted in the US Navy in 1950, where he served as a dental technician on the USS General W.A. Mann. In later years, Ray attended multiple ship’s reunions with former crew at various naval ports on the coasts. After discharge in 1953, Ray worked a handful of jobs, including a stint at WGBF, before landing at Mead Johnson & Company, where he worked in pharmacology and toxicology lab research for 38 years. While at MJN, he met and married fellow MJN employee Helen Lou Wallace. Ray was a lifelong music fan, with a special affinity for early jazz. He sang in the choir at St. Benedict and performed in the annual musicals produced by the men’s club. Ray was a member of the St Vincent de Paul society where for 42 years he was involved in weekly mission work at the Evansville State Hospital. In recognition of his many years of devotion to this cause, he received a Mother Teresa Service Award. Ray was an avid reader on a wide variety of science-centered topics, beginning with frequent visits to neighboring Willard Library in his childhood and extending throughout his life. After retirement, he shared his love of reading by volunteering with The Literacy Center. In his retirement he also developed a passion for race walking and support for youth track and cross-country sports. Through his long association with the Greater Evansville Runners and Race Walkers club, most days found him either training, competing, organizing or volunteering in countless events throughout the tristate and beyond well into his 80’s. He is survived by his daughter, Rita (Bobby) Harper; sons, Michael (Carla) Pritchett, Raymond W. (Jana) Pritchett and Steven (Nikki) Pritchett; grandchildren, Stephanie (Lenny) Marchino, Erin (James) McCormack, Alyson (Sam) Elliott, Rachel Harper, Justin (Elyse) Harper, Michael Pritchett, Kristina Pritchett, Andrea (David) Brooks, Alex (Ashley) Pritchett, Chloe (Jacob) Jewell, Grace Pritchett, and Sarah Pritchett; numerous great grandchildren; step-daughter, Elizabeth Dowling; nieces and nephews. In addition to his parents, Raymond was preceded in death by his wife, Helen Lou (Wallace) Pritchett; stepdaughter, Debra Critchlow; and sister, Joyce Anne DeVillez. Visitation will be from 3:00 p.m. to 7:00 p.m. Friday, April 30, 2021 at Ziemer Funeral Home East Chapel, 800 S. Hebron Avenue, Evansville. Funeral services will begin at 9:00 a.m., Saturday, May 1, 2021 at the funeral home. In lieu of flowers, memorial contributions may be made to St. Vincent de Paul Society at St. Benedict Cathedral, 1328 Lincoln Avenue, Evansville, IN 47714. The family would like to express heartfelt gratitude for the loving care and friendship provided by Senior Helpers and the staff and residents of Willow Park Retirement Community. Condolences may be made online at www.ziemerfuneralhome.com.

Raymond F. Pritchett, 89, of Evansville, passed away Tuesday, April 27, 2021 at his home. He was born May 3, 1931 in Evansville to the late Alvera (Tenbarge) and Raymond U. Pritchett. Ray grew up on West Illinois Street and attended Holy Trinity... View Obituary & Service Information

The family of Raymond F. Pritchett created this Life Tributes page to make it easy to share your memories.

Send flowers to the Pritchett family.