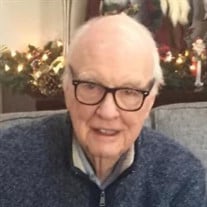 Raymond S. Norris Jr., 91, of Evansville, passed away Friday, September 10, 2021 at Deaconess Gateway Hospital. He was born December 26, 1929 in Evansville to the late Lucy Virginia (Tharp) and Raymond Norris, Sr. Ray graduated from Central High School in 1948 where he served as student manager for the 1948 Boys Basketball team that went to the State finals. During his junior year of high school, he met the love of his life, Jeanne Boren, at a dance at the Community Center. She was wearing a Kelly-green sweater and had beautiful green eyes and the following day he told his best friend that was the girl he would marry. His dream came true, and they were married on January 15, 1950. After graduation he began his career at Sears where he retired after 41 years in 1989. His first job was operating a freight elevator and he quickly advanced to a salesman in the sporting goods department. Over the years he held various management positions in Evansville, Columbus, Ohio, and at the corporate headquarters in Chicago, Illinois. He retired in 1989 as the store manager at the Washington Square store. He enjoyed traveling and visited the entire continental U.S. In the summer of 1968 he took his wife, Jeanne, and four daughters ranging in age from 17 – 3 on a six-week odyssey throughout the western United States in what became known among the family as “The Big Trip.” Annual summer trips saw him hitting the road with his family to tour National Parks, historic sites, and everything in between. After his retirement he and Jeanne took many vacations together. Ray lost his beloved wife Jeanne in 2006 after 56 years of marriage. In his later years he liked reading, listening to music (especially Barbra Streisand), and watching Cardinals baseball, old movies on Turner Classic Movies, and MSNBC. He enjoyed spending time with his friend Elizabeth Steckler. Ray was a dedicated and loving husband, father, grandfather, great grandfather, and great great grandfather who was lovingly known as Boppaw or Bop. He made sure he called everyone on their birthdays to sing “Happy Birthday.” His entire family will always remember his motto, “As you ramble on through life whatever be your goal, keep your eye upon the donut and not upon the hole.” He is survived by his daughters, Chris Borrego (Ron Walden), Susan (Anthony) Clouse and Leslie (Jon) Townsend; grandchildren, Heather (Dan) Steiner, Angela Borrego, Alyson Borrego, Ethan Townsend and Christian Townsend; great grandchildren, Quene (Michael) Johnston, Allea Steiner (Riley Heftye), Maiya Clouse, Laeya Borrego, Makkah Borrego, Mahsiah Borrego, Freedom Thompson, Akasha Borrego Rivers and Keyara Rivers; 6 great great grandchildren. In addition to his parents, Ray was preceded in death by his wife, Carolyn Jeanne (Boren) Norris, and daughter, Kelly Norris. Ziemer Funeral Home is handling his arrangements. A Celebration of Life will be held at a later date. Memorial contributions may be made to American Lung Association, 115 W. Washington St., Ste. 1180-S, Indianapolis, IN 46204. Condolences may be made online at www.ziemerfuneralhome.com.

The family of Raymond S. Norris Jr. created this Life Tributes page to make it easy to share your memories.

Send flowers to the Norris family.