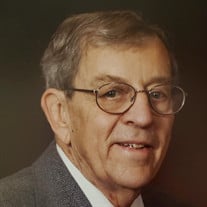 Ralph William Elsner, 93, of Evansville, passed away at his home in Evansville, Indiana on January 15, 2020. He was born September 3, 1926, to the late Linus Henry and Marie Helen (Becker) Elsner. He is survived by his 3 children, Sheila Rutkowski of Carmel, Indiana, Allen Elsner of Evansville, Indiana and David Elsner (Keryl) of Newburgh, Indiana; sister, Mary Jane (Don) Holmes, of Overland Park, Kansas; grandchildren, Michael and Jennifer Rutkowski and Diandra and Drew Elsner; nieces and nephews. He was preceded in death by his parents; loving wife, Mary Helen; sister, Adeline Barwe (Eddie); brothers, Linus “Bud” Elsner (Sally), Norman Elsner, and Mary Jane’s children, Lynn and Dan. Ralph graduated from Reitz High School and the University of Evansville with an undergraduate degree in Industrial Engineering and a Master’s Degree in Business Administration. He retired after 35 years with Bristol Myers Squibb where he was a Manager of Quality Control. Ralph was a World War II veteran and was stationed in Okinawa, Japan. He was blessed to be able to take the Honor Flight to Washington, D.C. at 93 years of age and was so thankful to everyone involved in the Honor Flight event. He was an active member of Annunciation Catholic Church, formerly Christ the King. In recognition of his service to his church, Ralph was inducted into the honorary association known as the Bruté Society. He was a charter and continuing member of the Abbot Martin Marty Guild at Saint Meinrad. Ralph was a devoted father, grandfather and sports enthusiast, attending every game or event his kids or grandkids were participating in. He was a wonderful mentor and wise counselor. He prayed for his children and grandchildren daily. He would joke sometimes stating, “I put a little extra pressure on God this morning with some extra prayers for the grandkids.” He was a gentleman and stayed calm in difficult situations. Ralph loved the Saint Louis Cardinals and the Notre Dame Fighting Irish. He agonized over every managerial move and passed this onto his sons who currently carry the torch for the Cardinals. He enjoyed playing bridge and dancing with his lovely bride, Mary Helen. After she taught him how to dance, they were regulars at the Friday Night Dance Club. Special thanks to Heart to Heart Hospice, Around the Clock Care and the VA for your loving care and support. Visitation will be Friday, January 17, 2020 from 4:00 p.m. to 8:00 p.m. at Ziemer Funeral Home East Chapel, 800 S. Hebron Ave., Evansville, 47714, where a Celebration of Life service will be held at 6:00 p.m. Visitation will continue Saturday, January 18, 2020 from 9:00 a.m. to 10:00 a.m. at Annunciation Catholic Church, 3010 E. Chandler Ave., Evansville, 47714 where a Mass of Christian Burial will begin at 10:00 a.m. with Father Alex Zenthoefer officiating. Entombment will be at St. Joseph Mausoleum immediately following the Mass. Memorial contributions may be made to Annunciation Catholic Church, 3010 E. Chandler Ave., Evansville, IN 47714, Honor Flight of Southern Indiana, P.O. Box 8234, Evansville, IN 47716 or Youth First of Southern Indiana, 111 SE Third St., Suite 405, Evansville, IN 47708. Condolences may be made online at www.ziemerfuneralhome.com.

Ralph William Elsner, 93, of Evansville, passed away at his home in Evansville, Indiana on January 15, 2020. He was born September 3, 1926, to the late Linus Henry and Marie Helen (Becker) Elsner. He is survived by his 3 children, Sheila... View Obituary & Service Information

The family of Ralph William Elsner created this Life Tributes page to make it easy to share your memories.

Ralph William Elsner, 93, of Evansville, passed away at his home...

Send flowers to the Elsner family.