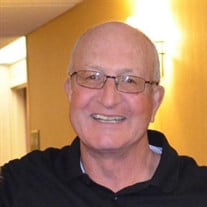 PERRY NORMAN FUCHS On Oct 10th our family lost our husband, father and best friend after a short battle with GBM. Perry passed away at home, his favorite place in the world. Perry was born June 22, 1950 in Hazen, ND to Norman & Hulda (Sailer) Fuchs. He was a proud US second generation German from Russia. He graduated from Zap (ND) High in 1968 and Dickinson State (ND) in 1972 with a degree in Secondary Education and History. Perry began his work career with the US Customs Service in 1973 as a Customs Inspector serving 32 years. His first duty station was at North Gate in North Dakota at the Canadian border. He also did some temp duty at Minot International Airport. Perry transferred to Evansville and became the Port Director for Evansville/Owensboro in 1978 and remained in this position until retirement in 2005. He was always active with running, walking and going to his boys’ activities when they were young. Perry was also our grill master—grilling for family and friends over the years. He so enjoyed being outdoors. During retirement Perry enjoyed golfing at Thunderbolt with his buddies. He thoroughly enjoyed walking those 18 holes. Perry was a life-long avid reader of history, current events, politics and foreign affairs. He never met a cat (or dog) he didn’t like having “rescued” a few feral cats over the years from the nearby woods who eventually became best buddies. Perry really enjoyed feeding and watching “his” birds and was becoming good at identification. Perry is survived by his wife of 39 years, Carol Lee (Mudd) and 2 sons, of whom he was so very proud, Jacob & his family (Mayme, Ramsey and Hazel) of Evansville and Colin also of Evansville, his brother-in-law, Bud Mudd (Diana) and one grandson. His cats: LilOne, MissySue and ShortyLou. Also surviving Perry are four sisters and a brother: Nona Schulz (Ross) of Yakima WA; Gail Craig of Lewiston ID; Susan Schaff (Dale) of Wamego KS; Sam Fuchs (Janice) of Deary ID and Kristine Bookman (Steven) of Ventura CA; 3 nieces, Nikki, Jessica and Kelly and 1 nephew, Matt. He was our hero & champion always making sure his family had what they needed. We will miss his laugh and snappy sense humor but he will always remain in our hearts with very fond memories and great stories to tell. The family would like to thank the fine people of Heritage Hospice, especially his nurses, Amy, Angie, Amy R and Nancy for their help and guidance the last few months. As per Perry’s request there will be no service. Memorial contributions may be in his name to the Vanderburgh County Humane Society, 400 Millner Industrial Rd, Evansville, IN 47710. Ziemer Funeral Home North Chapel is handling the final arrangements. Condolences may be made online at www.ziemerfuneralhome.com

PERRY NORMAN FUCHS On Oct 10th our family lost our husband, father and best friend after a short battle with GBM. Perry passed away at home, his favorite place in the world. Perry was born June 22, 1950 in Hazen, ND to Norman & Hulda (Sailer)... View Obituary & Service Information

The family of Perry Norman Fuchs created this Life Tributes page to make it easy to share your memories.

Send flowers to the Fuchs family.