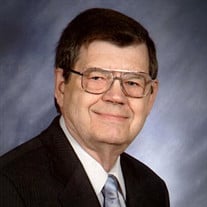 Paul Edward Baronowsky, 90, died October 26, 2020, at the Evansville Protestant Home. Paul was born in Evansville, IN, in 1930, son of Joseph Edward (“Ed”) and Tillie (Schmidt) Baronowsky. He graduated from Reitz Memorial High School in 1948, then served in the U.S. Air Force four years during the Korean War. He graduated with highest distinction from Purdue University in 1958 with a BS degree (Chemistry), and he was awarded a Ph.D. degree (Biochemistry) by Harvard University in 1963. He stayed an additional year at Harvard as a post-doctoral research fellow. While attending Purdue, Paul met Anita Marie Greene, from Staten Island, NY. Paul and Anita married in Lafayette in 1957. The couple had four children: sons Wayne and Stephen, and daughters Elizabeth and Meghan. Paul was preceded in death by his parents “Ed” and Tillie Baronowsky, brother James Bernard Baronowsky, sister Anna Marie Hollinden (Joe), and nephew “Big John” Hollinden. He is survived by his wife of 65 years Anita; son Wayne E. (Barbara, aka Susie) of Ballard County, KY; son Stephen P. (Kathy) of Clarksville, MD; daughter Elizabeth A. of West Lafayette, IN; daughter Meghan M. of Endwell, NY; four grandchildren and one great grandson; nieces and nephews. Paul was employed by Arthur D. Little, Inc. in Cambridge, MA, for four years before returning to Evansville to take a position at Mead Johnson Research Center. He took early retirement in 1985. After that, he taught chemistry at USI for thirteen years as a member of the adjunct faculty. During this time he also worked as a board operator/announcer at public radio station WNIN-FM. Paul’s strong hobby interest in foreign languages started in high school when he studied Latin. Next, the USAF send him to ALS (Army Language School, now DLI, Defense Language Institute) to take an intensive course in Russian. He was sent to Germany for nearly three years where he learned German; and along the way he picked up enough French to be able to read articles in the three main European languages for scientific research publications. Shortly before he retired in 2000, he turned to his favorite hobby to keep his mind actively engaged with what he had enjoyed. He started by learning the basics of Biblical Hebrew and Koine Greek by himself. Later he found and became involved with several language-study e-mail lists on the internet. He joined study groups for Hebrew, Greek, Latin, French and Russian led by others, and he led his own groups for Hebrew, Greek, German, and Spanish, from all of which he derived much pleasure. Later, as his health began to decline, he gave up a large part of his participation in internet groups and kept up his self-study of Dutch Platdeutsch (Low German), Anglo-Saxon (Early English), and Icelandic. Visitation will be at Ziemer Funeral Home East Chapel, 800 S. Hebron Ave., from 2:00 pm -7:00 pm Friday, October 30, 2020 and from 9:00 am – 9:45 Saturday, October 31, 2020 at the funeral home. A Mass of Christian burial will be held at 10:00 am Saturday at Holy Rosary Catholic Church, 1301 S. Green River Road. Burial will be at St. Joseph Cemetery. In lieu of flowers, memorial contributions may be made to St. Vincent de Paul Food Bank, 809 N Lafayette, Evansville, IN 47711, the American Diabetes Association, P.O. Box 7023, Merrifield, VA 22116 American Heart Association, 6500 Technology Center, and Zionsville, IN 46077or to one’s favorite charity.

The family of Paul Edward Baronowsky created this Life Tributes page to make it easy to share your memories.

Send flowers to the Baronowsky family.