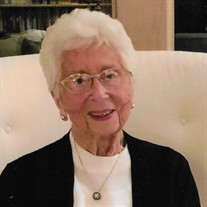 Mary Jayne Scherer Haller died Monday, March 8, 2021 in Atlanta, Georgia. She was born April 10, 1924 in Eagle, WI to Gertrude and Howard Scherer. The family traversed the United States during her early years and settled in Peoria, IL where Mary graduated from the Academy of Our Lady High School. She then attended Mundelein College for Women in Chicago. After meeting and marrying her husband Don, they moved to Evansville, IN to raise their family and became active members in both church and community. Since 1955, Mary was a parishioner of Christ the King/Annunciation Parish. She was one of the parish’s first lay Eucharistic Ministers and was a member of the St. Vincent de Paul Society where she served as president for ten years. St. Mary’s Hospital (now St. Vincent Hospital) was near and dear to her heart and she loved devoting her time to it. A charter member of the St. Mary’s Medical Center Auxiliary, she began service in 1952 by helping move patients from the old location on 1st Avenue to its current location. She served two terms as president of the Auxiliary and lovingly decorated the main entrance and lobby at Christmastime for 38 years. In 1972, she became the first woman to serve on the hospital’s Lay Advisory Board. Until very recently, Mary held the record for most hours ever served by one volunteer. In honor of her love and respect for the Daughters of Charity, during their 350th year anniversary in 1982, Mary was named a Lay Affiliate of the Daughters. Mary was active in civic, school and Catholic diocesan projects. A member of the Junior League, she served in numerous capacities and met many women who became lasting friends. She worked part time at Carol Lant’s dress shop (where the fun and laughter never stopped) and at Em Siler Antiques. In addition to her parents, she is preceded in death by her husband, Donald; son, James P. Haller; brother, James Scherer, and his wife, Penny and brother, John Scherer and his wife, Patty; brother-in-law, Edward Haller, and his wife, Maurine; and son-in-law, Sidney Turner. Mary is survived by her son, Donald F. Haller, Jr., of Garland, TX; her daughter, Barbara Turner, of Atlanta, GA; Nancy Haller, of Bradenton, FL; sister, Sue Conner, of Peoria, IL; and numerous beloved nieces and nephews. Mary has seven grandchildren, Michael Brooks Haller, of Dallas, TX, Jim and Ted Turner, of Atlanta GA, Chesley Turner, of Philadelphia, PA, Megan Haller, of Bradenton, FL, and Michelle and Madeline Haller, of Atlanta, GA. Visitation will be from 9:30 a.m. to 10:30 a.m. Saturday, March 20, 2021 at Annunciation Parish-Christ the King Campus, 3010 East Chandler Avenue. A Mass of Christian Burial will begin at 10:30 a.m. at the church with Father Ted Tempel officiating. The Mass will be live-streamed on the Ziemer Funeral Home and Cremation Services’ Facebook page. Burial will follow at St. Joseph Cemetery. In lieu of flowers, donations may be made to the following: Fr. Ted Tempel and Rose Lee Tempel Cox Crisis Fund (ID #629) at the Catholic Foundation of Evansville at www.catholicindiana.org/give-now or P.O. Box 4169, Evansville, IN 47724 or Annunciation Catholic Church, 3010 East Chandler Ave., Evansville, IN 47714. Condolences may be made online at www.ziemerfuneralhome.com.

Mary Jayne Scherer Haller died Monday, March 8, 2021 in Atlanta, Georgia. She was born April 10, 1924 in Eagle, WI to Gertrude and Howard Scherer. The family traversed the United States during her early years and settled in Peoria, IL where... View Obituary & Service Information

The family of Mary Jayne (Scherer) Haller created this Life Tributes page to make it easy to share your memories.