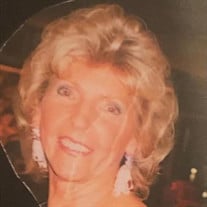 Mary June (Skinner) Steinback, 88, of Evansville, IN passed away peacefully at her home into the loving arms of our Heavenly Father on Saturday, February 20, 2021. She was born in Evansville, September 26, 1932, to the late James and Mary (Dempsey)... View Obituary & Service Information

The family of Mary "June" Steinback created this Life Tributes page to make it easy to share your memories.

Mary June (Skinner) Steinback, 88, of Evansville, IN passed away...

Send flowers to the Steinback family.