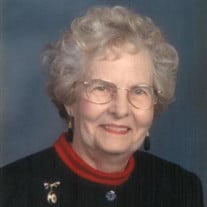 Mary J. (Josie) Braun of Shoreline, WA, formerly of Evansville, IN, passed away on February 23rd, 2022 at the age of 91. Josie was born September 25, 1930 in Whitesville, KY to the late Julian and Ann Burch. At an early age the family moved... View Obituary & Service Information

The family of Mary J. "Josie" Braun created this Life Tributes page to make it easy to share your memories.

Send flowers to the Braun family.