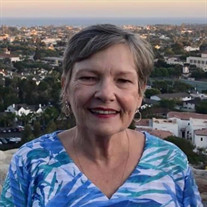 On her 50th birthday Martha Kuenzli Smith decided she would go by Marty, and did so from that day forward. She was born on August 21, 1945 in Evansville, Indiana and passed away on July 9, 2021 in Simi Valley, California after a year-long battle with cancer. In the years between, she lived a full and amazing life that touched and enriched the lives of countless others. She graduated in the Bosse High School class of 1963 and DePauw University class of 1967 (where she was president of Alpha Chi Omega sorority), and earned a Master’s Degree from the University of Evansville. She taught Suzuki Method violin and was an instructor in English and Humanities at the University of Southern Indiana until retiring in 2013 and moving to California to be with her two children, Katherine and Trent, and her three grandchildren. She was a member of Foothills United Methodist Church in La Mesa, California. Marty loved music and had a lifelong passion for Broadway musicals from Jerome Kern to Lin-Manuel Miranda. She was a founding member of the Evansville Musician’s Club Chorus and past board member of the Evansville Philharmonic Orchestra. She loved books and consistently read at least 50 every year for decades. Nothing made her happier than walking into a used book store. She loved movies, especially North By Northwest which she watched dozens of times and had memorized every line of dialogue. One of her most prized possessions was the handwritten response she received to a childhood fan-letter she sent to Eva Marie Saint. She loved crossword and jigsaw puzzles and card games, and considered them the only reasonable use for computers. She was a contestant on Jeopardy! in the 60s. Marty loved travel, and visited four continents and 49 of the 50 states - only the twin curses of COVID and cancer prevented her planned trip to Hawaii. She also loved pug dogs and owned two during her lifetime, including her beloved companion Zora who she adopted from Pug Rescue of San Diego in 2018. Marty claimed to be an unassuming wallflower but really she was anything but. Her unending sweetness and joy for life were infectious and she made friends instantly - including even occasionally with strangers on the subway. Nobody who ever met her will forget her smile or her laugh. Her motto in life came from the play and movie Harvey, that “in this life you must be oh so smart or oh so pleasant, and I recommend pleasant.” Visitation will be from 9:00 a.m. to 10:00 a.m. Saturday, July 31, 2021 at Trinity United Methodist Church, 216 SE 3rd Street, Evansville, IN 47713. A funeral service will begin at 10:00 a.m. at the church with Reverend Todd Gile officiating. Burial will follow at Oak Hill Cemetery. Donations in her memory can be made to the American Cancer Society, P.O. Box 22478, Oklahoma City, OK 73123 or the American Humane Society of the United States, 1255 23rd Street, NW, Suite 450, Washington, DC 20037. Condolences may be made online at www.ziemerfuneralhome.com.

On her 50th birthday Martha Kuenzli Smith decided she would go by Marty, and did so from that day forward. She was born on August 21, 1945 in Evansville, Indiana and passed away on July 9, 2021 in Simi Valley, California after a year-long battle... View Obituary & Service Information

The family of Martha Kuenzli Smith created this Life Tributes page to make it easy to share your memories.

On her 50th birthday Martha Kuenzli Smith decided she would go...

Send flowers to the Smith family.