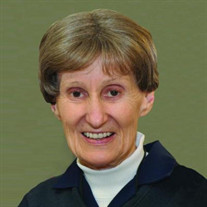 Sister Margaret (Margaret Catherine) Polheber died on January 10, 2021 at Seton Residence in Evansville, Indiana. Sister Margaret was born on July 5, 1929 in Chicago, Illinois and was one of four children of Philip and Stella (Kubala) Polheber. Sister graduated from Jones Commercial High School in Chicago in 1947 and entered the Daughters of Charity in St. Louis, Missouri in 1951. After initial formation, Sister Margaret was sent to use her many clerical skills in the Business Offices at hospitals in Nashville, Tennessee, Evansville, Indiana, Los Angeles, California and Dallas, Texas. She then received a B.S. in Business Administration and Psychology from Regis College in Denver, Colorado and a MSA degree in Administration from Notre Dame University in Indiana. From 1968 to 1970 Sister Margaret served as the Director of Seton Health Care Network in Austin, Texas and then for the next three years as a Personnel Assistant at St. Mary Hospital in Milwaukee, Wisconsin. She was missioned to Chicago, Illinois where she was a Parish Visitor for two years at St. Patrick Parish and then an Elderly Outreach Worker at St. Vincent de Paul Senior Services until 1981. Sister Margaret became the Provincial Treasurer for Mater Dei Provincialate in Evansville, Indiana until 1987. She then served in a variety of ministries including Pastoral Care Associate at St. Vincent Hospital in Birmingham, Alabama, Providence Hospital in Mobile, Alabama and St. Thomas Hospital in Nashville, Tennessee. During this period, she also had two terms as a Docent at Seton Shrine in Emmitsburg, Maryland and an assignment as Parish Minister at St. Mary Church in Fort Wayne, Indiana. In June, 2008 Sister Margaret came to Seton Residence in Evansville for the Ministry of Prayer until the time of her death. Sister Margaret will be buried in St. Joseph Cemetery and a memorial Mass will take place at a later date. Sister was preceded in death by her parents and her brothers George and Ed Polheber and her sister Trudy Suszki. She is survived by nieces and nephews, her Sisters in Community and many friends. Donations may be made to the Daughters of Charity, 4330 Olive Street, St. Louis, MO 63108. Ziemer Funeral Home Central Chapel is handling the arrangements. Condolences may be made online at www.ziemerfuneralhome.com.

Sister Margaret (Margaret Catherine) Polheber died on January 10, 2021 at Seton Residence in Evansville, Indiana. Sister Margaret was born on July 5, 1929 in Chicago, Illinois and was one of four children of Philip and Stella (Kubala) Polheber.... View Obituary & Service Information

The family of Sister Margaret Polheber created this Life Tributes page to make it easy to share your memories.

Send flowers to the Polheber family.