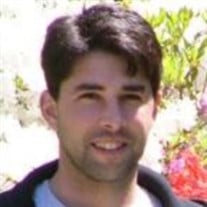 Not sure what to send?

Marc Amiguet Schmitt, 49, of Evansville, passed away at his home from natural causes on January 10, 2022. He was born on April 25, 1972 in Evansville to Madeleine Louise (Amiguet) Schmitt and the late David Michael Schmitt. Marc graduated from Central High School, attended Indiana University, and served as President of Chi Phi Fraternity. He studied business and accounting. As a youth he enjoyed work. He was a morning newspaper carrier, worked at the Pie Pan, and did yard work. He had also worked at Macy’s and had worked for auction houses. He learned about vegetable gardening from his grandfather Ivan Schmitt, and would share the produce with his neighbors. Marc was creative and one of his favorite hobbies was writing short stories. From an early age he had a great appreciation of art, especially Pre-Columbian and Spanish Colonial, which led him to a career in art and antiques, which brought him great happiness. Because of his career, he was able to travel and have many adventures, especially in Guatemala, a country of which he was especially fond. Throughout his adult life he had a great passion for studying ancient cultures and their artifacts, and was fortunate enough to visit many of the ancient sites that were special to him. He was interested in many topics and kept informed on the news of the day. He was proud to be living in the home that his grandfather Louis Amiguet designed. Marc always loved animals, as his father did, and leaves behind his two dogs, Ludwig and Affe. Marc is survived by his mother, Madeleine Schmitt; brother, Michael L. Schmitt; aunts, Josette F. Wagner and Luisa S. Olayos; and many cousins. In addition to his father, David Michael Schmitt, Marc was preceded in death by his grandparents, Ivan David and Margaret Schmitt, and Madeleine and Louis Amiguet. The family appreciates the outpouring of sympathy and the sharing of remembrances of Marc from his many friends. Marc’s life on earth is over. He has made the journey home. Visitation will be from 12:30 p.m. to 1:00 p.m. Thursday, January 20, 2022 at Holy Redeemer Catholic Church, 918 W. Mill Road, Evansville, IN 47710. A funeral service will begin at 1:00 p.m. at the church with Father Jason Gries officiating. The service will be livestreamed on the Ziemer Funeral Home and Cremation Services’ Facebook page. Burial will follow at St. Joseph Cemetery. Memorial contributions may be made to the Vanderburgh Humane Society, P.O. Box 6711, Evansville, IN 47719-6711 or the charity of your choice. Condolences may be made online at www.ziemerfuneralhome.com.

Marc Amiguet Schmitt, 49, of Evansville, passed away at his home from natural causes on January 10, 2022. He was born on April 25, 1972 in Evansville to Madeleine Louise (Amiguet) Schmitt and the late David Michael Schmitt. Marc graduated from... View Obituary & Service Information

The family of Marc Amiguet Schmitt created this Life Tributes page to make it easy to share your memories.

Marc Amiguet Schmitt, 49, of Evansville, passed away at his home...