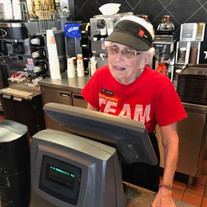 Loraine Maurer (aka the McDonald lady) 98, of Evansville, IN passed away on February 12, at the Protestant Home. She was born September 22, 1922 to Henry and Margaret Ubelhor. Loraine was very content living in Evansville all her life but enjoyed traveling extensively to Europe, Russia, Australia and almost all of the 50 states, including Alaska and Hawaii. Loraine worked for McDonald Corporation for over 45 years at many of the east side locations, the last was North Green River Road and Lynch. Celebrating her 44 years with McDonalds, a segment was made about her age and her many years of service. This video clip can still be viewed around the world and able to be viewed by looking up “94 year old McDonald Woman”. Loraine was a member of Holy Spirit Catholic Church and then a member of Good Shephard Catholic Church. She attended St. Benedict grade school and part of the 1940 class of Memorial High School. Loraine met the love of her life Kenneth John Maurer at a ball game. She traveled to San Luis Obispo, California in 1942 during the war where they were married. As a young married couple Ken worked for Whirlpool and Loraine worked for Woolworth and the Evansville Drive in Theater. Together they had four children: Kenny (Glenna) Maurer of Ohio, Vickie (Larry) Arflack of Chandler, IN, Charmaine (Scott) Martin of Evansville, IN, and Cindy (Tim) Bilderback of Clarksville, TN. Loraine also leaves behind 1 sister; Betty Phillips, 8 grandchildren; Michalle Maurer, Kendall Maurer, Christy Arflack, Larry Arflack II, Tiffany (Sean) Davidson, Richard (Tia) Martin, David Bilderback, Timmy (Shyna) Bilderback, and 6 great grandchildren. Loraine was preceded in death by her husband Ken in 1980, her parents, her siblings; Evely Schuble and Richard Ubehlor, granddaughter, Staci Maurer, brother- in –laws; Gilbert Schuble, Herman Phillips, and nephews; Terry Philips and Danny Schuble. Due to the pandemic a private family funeral service will be held at St. Joseph Mausoleum. A celebration of Loraine’s life will be held at a later date. Ziemer Funeral Home East Chapel is handling the arrangements. The family would like to express our sincere thanks and gratitude to the staff of the Evansville Protestant Home for the care they gave to Loraine. In lieu of flowers memorial contributions bay be made to the Ronald McDonald House, 3540 Washington Ave, Evansville, IN 47714. Condolences may be made online at www.ziemerfuneralhome.com

Loraine Maurer (aka the McDonald lady) 98, of Evansville, IN passed away on February 12, at the Protestant Home. She was born September 22, 1922 to Henry and Margaret Ubelhor. Loraine was very content living in Evansville all her life but enjoyed... View Obituary & Service Information

The family of Loraine Maurer created this Life Tributes page to make it easy to share your memories.

Loraine Maurer (aka the McDonald lady) 98, of Evansville, IN...

Send flowers to the Maurer family.