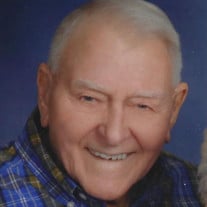 Lee J. “Bud” Werner, 90, of Evansville passed away Sunday, September 20, 2020 at Ziemer Funeral Home North Chapel surrounded by ALL of his family after spending the afternoon with the one he loved the most. He was born November 22, 1929 in Evansville to Lee and Antoinette “Dolly” (Moehlenkamp) Werner. He served in the Korean Conflict with the Army’s 712th Transportation Railway Operators Battalion. Upon his return to Evansville he worked for 42 years for six different railroads in the Evansville area. As an active member of St. Joseph Catholic Church in Vanderburgh County he helped start the Men’s Club, held each officers’ position, worked on the mowing crew, sang in the choir, worked in the summer social carry-out booth and was named Men’s Club Man of the Year. He and Sharon were members of the Carpenter’s Society and in 2012 they received the Diocesan Brute’ Award. Following in his father’s footsteps, Bud was an active life-long member of the Evansville Athletic Club. He was on the Board of Directors and Farm Board, helped with the weekly bingo and yearly turkey shoot for years. He was a member of Twin Towers, a life member of the American Legion Funkhouser Post #8 and a member of VFW Post #1114. One of his proudest achievements was being a 73-year member of the American Automobile Association! He loved watching sports, especially the St. Louis Cardinals! He was preceded in death by the love of his life, Sharon, by only four days. They married on July 26th, 1950 and celebrate their 70th Wedding Anniversary this year with a drive-by parade of family and friends. Also preceding him in death were his parents and his sister Jeanette Werner. He is survived by his six children Jim (Diane), Mark (Annette), Janet Jarvis (Kenny), Donald (Renee) all of Evansville, Bruce (Lisa) of Cross Plains, Indiana and Karen Franz (Wayne) of Tennyson, Indiana, 11 grandchildren and 8 great-grandchildren. Visitation will be from 3:00 p.m. to 7:00 p.m. Tuesday, September 22, 2020 at Ziemer Funeral Home North Chapel, 6300 N. First Ave., Evansville. Memorial service will begin at 6:00 p.m. at the funeral home. Visitation will continue from 9:00 a.m. to 10:00 a.m. Wednesday, September 23, 2020 at Saint Joseph Catholic Church in the county, 6202 W. St. Joseph Rd., Evansville. Mass of Christian Burial for Bud and his wife, Sharon, will begin at 10:00 a.m. with Father Gene Schroeder officiating. Burial for both Bud and Sharon will follow at Saint Joseph Catholic Cemetery in the county with the Retired Veterans Memorial Club conducting military rights. A special thank you to the “Saturday Night crew” for all of their help, love and support!! The family would also like to thank the staff at Holiday Retirement Village for being so attentive over the last two years. Additionally, special thanks to Heritage Hospice for all of their help and support. In lieu of flowers or arrangements contributions may be made to the St. Joseph Catholic Church Parish Endowment, Vanderburgh County. Condolences may be made online at www.ziemerfuneralhome.com.

Lee J. &#8220;Bud&#8221; Werner, 90, of Evansville passed away Sunday, September 20, 2020 at Ziemer Funeral Home North Chapel surrounded by ALL of his family after spending the afternoon with the one he loved the most. He was born November... View Obituary & Service Information

The family of Lee J. "Bud" Werner created this Life Tributes page to make it easy to share your memories.

Send flowers to the Werner family.