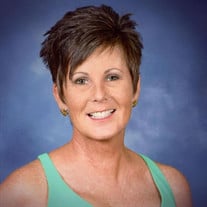 After a courageous 15-year battle with cancer, Laurie A. Witting victoriously entered eternal life on January 6, 2021. She was surrounded by her family and friends in the final months, days and moments of her life and her transition was peaceful. Laurie was born December 28, 1964 in Cincinnati, Ohio, to Paul and Anna (Petri) Smith. After graduating from Turpin High School, she attended a dental school where she was trained as a dental assistant. She was employed in this profession until the birth of her third child in 1994 when she relished the transition to become a full-time mother, homemaker, and active participant in every aspect of her family’s lives. In 2011, she returned to the workforce with Paragon Promotions where she worked until retiring in 2016. She was a faithful member of Good Shepherd Parish where her children attended school. She was a long-time bingo and social worker. Among other activities in the school; she co-chaired the yearbook committee for a number of years and was instrumental in the development of the playground in back of the school. She enjoyed traveling. Her husband and family relished their family vacations together in Destin, Gatlinburg, Grand Cayman, Colorado, and Ireland to name a few. She and her husband enjoyed exploring places and taking trips to Japan, Hawaii, Mexico, Jamaica, California and Western States among others. She also enjoyed many international cruises with her sisters-in-law and her girl gang of lifelong high school friends. Laurie will always be remembered as a caring soul who lived a life of love for her family, friends and community. She was a model homemaker with a flair for landscaping, holiday decorating and the overall creation of a loving environment in which she nurtured her family. She enjoyed life to the fullest as long as life would allow. Laurie was preceded in death by her parents, Paul and Anna (Petri) Smith, and parents-in-law, John & Marian Witting. Laurie is survived by her husband, Steve; children, Frances (Greg) Tenery, Michael Witting, Samuel Witting, and Hannah Witting; and one grandchild, Harper Tenery, who called her Lala. She is also survived by her sisters, Danielle Dickerson and Anita Smith, of Cincinnati; sisters-in-law, Sarah (Gary) Demaree, of Muncie, IN, Cynthia Witting of Chandler, AZ, and Linda (Robert) Ruthig, of Kansas City, KS; and numerous nieces, nephews, aunts, uncles, and cousins. Due to the pandemic and Laurie’s wishes, services will be private. There will be a Mass of Christian Burial at Good Shepherd Catholic Church with Father Zach Etienne officiating, followed by the interment of her ashes at St. Joseph Cemetery. The family would like to thank the physicians and staff of Ascension St. Vincent Oncology and Hematology. Laurie’s caring team was led by Dr. Sheryl Ziegler whose compassion and guidance through this journey will not be forgotten. Ziemer Funeral Home East Chapel is handling the arrangements. In lieu of flowers, memorial contributions may be made in Laurie’s honor to Good Shepherd School, 2301 N. Stockwell Road, Evansville, IN 47715. Condolences may be made online at www.ziemerfuneralhome.com.

After a courageous 15-year battle with cancer, Laurie A. Witting victoriously entered eternal life on January 6, 2021. She was surrounded by her family and friends in the final months, days and moments of her life and her transition was peaceful.... View Obituary & Service Information

The family of Laurie A. Witting created this Life Tributes page to make it easy to share your memories.

After a courageous 15-year battle with cancer, Laurie A. Witting...

Send flowers to the Witting family.