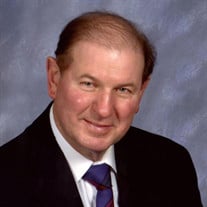 Kenneth Allen Montgomery, 79, of Evansville, IN passed away November 28, 2020 surrounded by family at Deaconess Gateway Hospital in Newburgh, IN. Ken was born on December 24, 1940 in Dubuque, IA. He was the son of Keith Austin Montgomery and Evelyn Mehl Montgomery. Ken married Constance (Connie) Pierce Hughes at Ocean Reef Club in Key Largo, FL on March 20, 1964. Ken and Connie enjoyed returning to “The Reef” for Spring Breaks with children, grandchildren, and extended family for the next 56 wonderful years of marriage. Ken was an Iowa all-state football athlete for Dubuque Senior High School. He went on to play football for the University of Wisconsin Badgers on scholarship. Two of his college years, including his senior year, the Badgers won the Big Ten conference and went to the Rose Bowl. He graduated from the University of Wisconsin in 1964 with a BS degree in Geology and Paleontology. Ken envisioned a career in oil exploration. However, just out of college Ken accepted an offer from Texas Instruments and became a supervisor in the semiconductor business. In 1965, few people including Ken, had any idea what a microchip was or how it would change the world. He worked on many projects including the Minute Man and Poseidon missile systems. In 1968, he began working in the furniture business at Flexsteel Industries, Inc. He started in management at the Waxahachie, TX division, moving up to the position of corporate Vice President and general manager of the Evansville Reclining Chair division. In 1992, Ken started Crestmont Corp., an Evansville furniture services business, serving as President for the next 20 years working alongside skilled and valued associates including his daughter and other family members. Ken enjoyed travel and playing golf. Ken experienced a hole-in-one, twice. His first, while in Scotland at Gleneagles with his son, Chris, as a witness, and one locally at Evansville Country Club where he was a member. Ken was also a member of Ocean Reef Club in Key Largo, FL. In college, he was a member of The W Club and Sigma Alpha Epsilon fraternity. In Evansville, Ken was a member of Aldersgate United Methodist Church, and was part of the church’s initial Kenya mission project. Those left to honor his memory include his loving wife, Connie, daughter Kimberly Sullivan (Patrick) of Evansville, son Chris Montgomery (Sheila) of Dublin, OH; three grandsons, Kyle Sullivan (Seattle, WA), Ben Montgomery (Dublin, OH), Matthew Montgomery (Dublin, OH); sister, Elenore Wolff (Gus) of Dubuque, IA, brother, Bruce Montgomery (Gina) of Glen Allen, VA; sisters-in-law, Nan Reider (Mike), Kay Thieleke; aunts, cousins, nieces, and nephews. Preceded in death by his parents, parents-in-law Mary Lou and Herb Hughes; and brother-in-law Doug Thieleke. In lieu of flowers, memorials may be considered through donations to the Michael J. Fox Foundation for Parkinson’s Research, Grand Central Station, PO Box 4777, New York, NY 10163-4777; the Junior Diabetes Research Foundation (JDRF), 200 Vesey Street, 28th Floor, New York, NY 10281; or the Aldersgate United Methodist Church Capital Fund, 5130 Lincoln Avenue, Evansville, IN 47715. A private memorial service will be scheduled in the future. Condolences may be made online at www.ziemerfuneralhome.com.

Kenneth Allen Montgomery, 79, of Evansville, IN passed away November 28, 2020 surrounded by family at Deaconess Gateway Hospital in Newburgh, IN. Ken was born on December 24, 1940 in Dubuque, IA. He was the son of Keith Austin Montgomery and... View Obituary & Service Information

The family of Kenneth Allen Montgomery created this Life Tributes page to make it easy to share your memories.

Kenneth Allen Montgomery, 79, of Evansville, IN passed away November...

Send flowers to the Montgomery family.