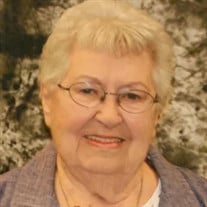 Julia Mae (Robertson) Blaize, 97, of Evansville, IN, passed away on Friday, January 29, 2021. She was one of ten children born April 12, 1923 to the late Ray and Della (Schmidt) Robertson in Bowman, near Petersburgh, IN. She was raised on a farm and was a true country girl. Julia attended Bowman Grade School and graduated from Petersburgh High School with honors always striving to be one of the top students. She was active in sports, especially basketball and active in Girl Reserves helping to improve school and community of fairs. She went on to Lockyear Business College in Evansville, IN. After leaving there her first job was at Ideal Pure Milk Company working as a comptometer operator. She worked at Fine and Fine Law Office, Selection Service Office in Pike County, at Crescent City Coal Company, Sunset Drive In Theatre and eventually retired from A & C supply Corp. after 20 years. Julia loved camping, crafts, gardening and was an avid reader. In later years volunteer work was an important part of her life and she made lifelong friends there. She attended First Christian Church and was a member of the Wednesday morning Bible Study group and former Mary Circle. Family was very important to her, she was devoted to each one, having family dinners quite often and celebrating each one’s birthday plus all holidays. Julia remained friends and big sister to her brothers and sisters and their spouses. In later years she delighted in meeting with them for a monthly breakfast or lunch. Julia met her husband John Blaize in 1940 when he came to her parents’ house to take the federal census, they married in 1943 and enjoyed 62 years of marriage before his death. He had spent 5 years of World War II serving the U.S. Army with one and half years in combat under General Patton. She is survived by her children; David (Rosie) Blaize, Carol (Steve) Travers, Eddie (Jama) Blaize, Sue Chase, 8 grandchildren, 8 great grandchildren, and 5 great great grandchild, brothers; Joe Robertson, sister; and Myrl (Dale) Hayes and many nieces and nephews. Julia was preceded in death by her parents, husband, sisters; Ruth Petrin, Jane Johnson Robertson, Margaret Morrow, and Sue Dreves brothers; Jerry Robertson, Charles Robertson and Allen Robertson, and son Ronnie Blaize. Visitation will be on Wednesday February 3, from 10:00 a.m. to 1:00 p.m.at Ziemer Funeral Home North Chapel 6300 N. first Avenue, Evansville, IN 47710, with a service at the funeral home beginning at 1:00 p.m. with Pastor sue Williams officiating. Burial will be at Sunset Memorial Park Cemetery. Memorial contributions may be made to Wounded Warriors Project, PO Box 158516, Topeka, KS 66675-8516 or the Vanderburgh Humane Society, 400 Millner Industrial Rd, Evansville, IN 47710. Condolences may be made online at www.ziemerfuneralhome.com

Julia Mae (Robertson) Blaize, 97, of Evansville, IN, passed away on Friday, January 29, 2021. She was one of ten children born April 12, 1923 to the late Ray and Della (Schmidt) Robertson in Bowman, near Petersburgh, IN. She was raised on a... View Obituary & Service Information

The family of Julia Mae (Robertson) Blaize created this Life Tributes page to make it easy to share your memories.

Julia Mae (Robertson) Blaize, 97, of Evansville, IN, passed away...

Send flowers to the Blaize family.