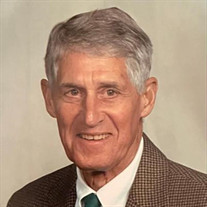 John H. Weber, 93, of Newburgh passed away Saturday, October 30, 2021, at Hamilton Pointe in Newburgh. He was born July 19, 1928 in Narberth, PA to the late Dr. Edgar and Elizabeth (Berry) Weber. John graduated from Dartmouth College and the Tuck School of Business in 1950. He joined the Sears and Roebuck training program in 1950, moving every 3-5 years and landed back in Evansville as store manager in 1963. In 1966 John joined Anchor Industries where he retired in 1993 as Senior Vice President and Director. John was a past board member of Wesselman Woods Nature Society, P.O.E.T.S. since 1971, Kennel Club of Evansville, and Evansville Country Club. He was a member of First Presbyterian Church. John always had a yen for the outdoors – kindled by Dartmouth and working the summer months of 1948 in Yellowstone. Beginning in the ‘80s, he and his wife Shirl hiked extensively in the San Juan and Collegiate ranges of Colorado. He truly enjoyed adventure and traveling, including the Norwegian Coast by boat – Bergen to the Russia border, Switzerland, Germany, Italy, Austria, Provence, Scotland, England, several Bike and Hike trips in Vermont, New Mexico and the mountains around Banff. In 1997 he and 9 Dartmouth alums went on a 500 mile Wilderness River canoe trip in Alaska, starting in the Brooks Range and ending at Ft. Yukon above the Arctic Circle. In 1998 he and Shirl took an 8 day raft and camp trip through the Grand Canyon. He also enjoyed spending time in Sanibel, FL. John is survived by his wife, Shirley (Lorentzen) Weber, who he married on June 18, 1949; daughters, Ann Berry-Weber of San Pedro, CA, Susan Weber-McCool of Evansville, IN, Polly Jane Uher (David) of Matthews, NC, and Sara Weber-Pfau (Mark) of West Bloomfield, MI; 12 grandchildren, John McCool (Angela), Sara McCool (Jeniele Cordell), Matthew Uher (Amanda), Aaron Uher (Sydni), Daniel McCool (Katie), Jonathon Uher (Anna), Alexandra Hydock, Emily Uher-Schmidt (Wade), Katie Pfau-Haber (Brian), Molly Pfau-Cornacchini (Nick), Amy Pfau-Wierenga (Jeb), and Caroline Pfau; and 24 great-grandchildren. John was preceded in death by his parents, and sisters, Jane Hatch and Eleanor Ellis. Visitation will be from 2:00 p.m. to 3:00 p.m. on Saturday, November 6, 2021 at Ziemer Funeral Home East Chapel, 800 S. Hebron Ave., Evansville, IN 47714. A service will follow at the funeral home at 3:00 p.m. with Reverend Kevin Fleming officiating. Burial will be at Oak Hill Cemetery at a later date. Memorial contributions may be made to Wesselman Park, USI Foundation or IU Foundation Camp Brosius.

John H. Weber, 93, of Newburgh passed away Saturday, October 30, 2021, at Hamilton Pointe in Newburgh. He was born July 19, 1928 in Narberth, PA to the late Dr. Edgar and Elizabeth (Berry) Weber. John graduated from Dartmouth College and the... View Obituary & Service Information

The family of John H. Weber created this Life Tributes page to make it easy to share your memories.

Send flowers to the Weber family.