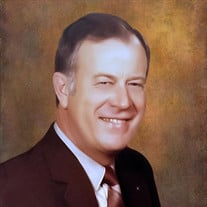 James (Jim) Samuel Clark, 86, of Evansville, passed away Thursday, September 2, 2021 at his home. He was born on December 14, 1934 in Midway IN to the late Edward and Sarilda (Glenn) Clark. He grew up helping with the family farm. He graduated from Richland High School in Richland, IN. Upon graduation, he enrolled at IU. He left college to serve in Korea from 1954-1956. After his service, he returned to IU, graduating with a BS degree in Marketing in 1958. After graduation, he married Joan LeClere in 1959. Jim and Joan had two sons, Dale and David. Jim began his career as a sales rep selling sandpaper for Behr Manning, with one of his customers being Auto Body Supply Company. He purchased Auto Body Supply in 1963. It became a family business, as his wife Joan was the bookkeeper. Later their sons, Dale and David joined them and subsequently took over running the business. He was a lifelong member of both Good Shepherd Catholic Church and American Legion. He was preceded in death by his parents, Ed and Sarilda Clark; his sister, Mary Frank and his wife of 55 years, Mary (Joan) Clark in 2014. His main joy was being around his family (especially his grandchildren) as well as rooting for the Chicago Cubs, Chicago Bears and IU basketball. He also enjoyed horse racing. Jim and Joan loved taking their grandsons to the horse races when they were younger. He is survived by his sons, Dale Clark and his wife, Kimberly, David Clark and his wife, Beth; sister in law Jan Menner and her husband John "Bud"; grandchildren, Samuel (Melissa) Clark , Aaron Clark, Ryan Clark , Matthew Clark and step-grandson, Mitchell (Angela) Mullis; several nieces and nephews. Jim has a great grandbaby, Riley James, son of Sam and Melissa Clark, due in October 2021. The family would like to thank Karen Pritchett of Senior Helpers (for the last five years) as well as her Senior Helpers colleagues and Heart to Heart Hospice Care for their compassionate care. A private family visitation and service will be held on Saturday, September 11, 2021 at Ziemer Funeral home East Chapel with Father Ted Tempel officiating. Burial will be later at Oak Hill Cemetery. Memorial contributions may be made to St. Vincent De Paul, 767 E. Walnut St., Evansville, IN 47713 or Good Shepherd Catholic Church, 2301 N. Stockwell Rd., Evansville, IN 47715. Written Condolences may be made online at www.ziemerfuneralhome.com.

James (Jim) Samuel Clark, 86, of Evansville, passed away Thursday, September 2, 2021 at his home. He was born on December 14, 1934 in Midway IN to the late Edward and Sarilda (Glenn) Clark. He grew up helping with the family farm. He graduated... View Obituary & Service Information

The family of James "Jim" Samuel Clark created this Life Tributes page to make it easy to share your memories.

Send flowers to the Clark family.