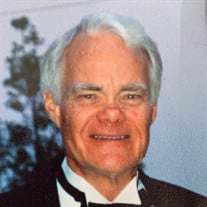 James Otto Hormuth, 89, of Evansville, passed away Sunday, May 9, 2021 at Ascension St. Vincent Hospital in Indianapolis. He was born June 14, 1931 in Evansville to the late Oswald and Clara (Ziliak) Hormuth. He was the youngest of three children. James grew up in the family home on Lewis Avenue, where he attended St. Benedict Catholic School and Reitz Memorial High School, graduating in 1949. During these years he was a continually active young man with his own paper route, an altar boy for daily mass, as well as playing football and tennis at Memorial. He was a tenor in the Men’s Glee Club which afforded him the opportunity to perform with Detroit’s Rackham Symphony Choir, an honor bestowed to only 50 high school seniors in the United States. He attended Evansville College to pursue a career in Civil Engineering and was a member of the tennis team. His college was interrupted in 1952 when he was called into military service. He served as the personal clerk for General Mark Clark in the headquarters of the Far Eastern Command Center in Tokyo, Japan. Following his honorable discharge for the Army he married the love of his life, Jean Burch, on February 13, 1954. He was admitted to Indiana University and was a member of the third class of the Indiana University Division of Optometry. He graduated in 1958 and began his private practice of Optometry in Boonville, where he practiced for 39 years. Jim served his church, his community, and his profession his entire life. He was recognized for his commitment to the community by receiving the Boonville Jaycees Distinguished Service Award in 1962. He was an active member in St. Clements Church, Boonville Lion’s Club, Southwestern Indiana Optometric Association, Indiana Optometry State Board Inspector and Adjunct member, Indiana Lion’s Eye Bank Trustee, Friday Night Dance Club, and the Evansville Coterie Club. In each of these organizations he held leadership positions. Jim is survived by his four children: David (Renee), Jennifer, Jim and John (Diane). He has ten grandchildren and 3 greatgrandchildren. In addition to his parents, Jim was preceded in death by his wife, Jean (Burch) Hormuth. Visitation will be from 5:00 p.m. to 7:30 p.m. Friday, May 14, 2021 at Ziemer Funeral Home East Chapel, 800 S. Hebron Ave., Evansville, where the Knights of Columbus will conduct a Rosary Service at 7:00 p.m. Funeral service will begin at 9:30 a.m. Saturday, May 15, 2021 at the funeral home and will continue at 10:00 a.m. with a Mass of Christian Burial at Holy Rosary Catholic Church, 1301 S. Green River Rd., Evansville with Father Bernie Etienne officiating. Burial will follow at St. Joseph Catholic Cemetery. In lieu of flowers, the family suggest memorial donations to St. Clement Building Fund, 422 E. Sycamore St., Boonville, IN 47601 or Holy Rosary Catholic Church, 1301 S. Green River Road, Evansville, IN 47715. Condolences may be made online at www.ziemerfuneralhome.com.

James Otto Hormuth, 89, of Evansville, passed away Sunday, May 9, 2021 at Ascension St. Vincent Hospital in Indianapolis. He was born June 14, 1931 in Evansville to the late Oswald and Clara (Ziliak) Hormuth. He was the youngest of three children. James... View Obituary & Service Information

The family of Dr. James Otto Hormuth created this Life Tributes page to make it easy to share your memories.

James Otto Hormuth, 89, of Evansville, passed away Sunday, May...

Send flowers to the Hormuth family.