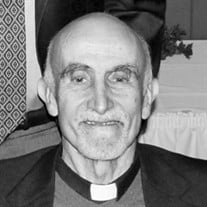 Reverend James Richard Endress passed away Wednesday, January 20, 2021. He was born on October 12, 1934 in Evansville, IN, the youngest of six children of Edmund Endress and Emma Rastatter. He attended St. Benedict Grade School. Raised in a very religious family, Jim then decided to become a Catholic priest. After eight years of study at St. Meinrad Seminary in Indiana, and four years at the Collegium Canisianum in Innsbruck, Austria, Jim was ordained in Innsbruck on April 3, 1960. He spent the next five years as a parish priest and high school teacher in Loogootee, IN. In 1965 Jim volunteered to serve as a chaplain with the U.S. Army. He says he was influenced to make this decision after talking with some of his former students returning from Vietnam. Jim spent 14 months with the 7th Infantry Division Artillery in Pobwani, Korea. In 1968 he was assigned to the 82nd Airborne where he was trained as a paratrooper, completing 83 jumps. In 1969 Jim was sent as a chaplain to Vietnam. He spent 6 months near Saigon, often accompanying platoons on combat missions. Next came 6 months with the 5th Special Forces operating in remote areas in the northern half of South Vietnam. During his stint in Vietnam, Jim received two Bronze Stars for heroism under fire. In his later military career Jim was assigned to several military posts in the United States. He earned a degree in Family Counseling from Fordham University. He also learned sufficient Spanish so that he could minister to the Spanish-speaking community. From 1977-1980, Jim was assigned to the Office of the Chaplain, U.S. Army Europe, headquartered in Heidelberg, Germany. In 1978, he was promoted to the rank of Lieutenant Colonel. On April 13, 1981, Jim was involved in a bicycle/car accident that left him a quadriplegic for the rest of his life. After months of intensive rehab, Jim returned to Evansville, IN and in November 1981 he was discharged from the Army. Jim adapted to his new limitations with characteristic courage and resolve. He assumed a number of responsibilities within the Diocese of Evansville and provided numerous ministerial services to schools, parishes and religious communities. Jim was a person of great erudition, well read on an amazing variety of topics. He had a dry wit, a legendary frugality, a self-effacing modesty, and an iron will. He had a great love of family, reveled in his many extended family relationships, and never missed a family celebration that was within his ability to attend. Most of all, Jim was a man of great faith and unimpeachable moral character, a person who never swerved from the simple truths and undiluted standards of conduct with which he was raised. Of him it can be truly said: "Well done, good and faithful servant ... Enter now into the joy of your Master!" (Matthew 25:23). Survivors include nieces and nephews Richard (Josie) Endress, Thom (Cindy) Endress, Janet (Robert) Squires, Carol Burns, Constance (James) Sutton, Daniel Burns, James (Donna) Burns, Jeffrey (Debbe) Burns, Sharon Burns, David (Linda) Burns, Michael Minielli, Barbara (Todd) Visser, Susan (Ross) Delay, Thomas Minielli; 26 great-nieces and nephews and 32 great-great-nieces and nephews. James was preceded in death by his parents, Edmund and Emma Rastatter Endress; his brothers, Eugene Endress, Rev. Ralph Endress and Raymond Endress; his sisters, Marjorie Burns and Mary Minielli; and two nephews, Stephen and John Endress. There will be a Vigil service beginning at 6:00 p.m. Sunday, January 24, 2021 at Holy Rosary Catholic Church, 1303 S. Green River Rd. A Mass of Christian Burial will begin at 10:00 a.m. Monday, January 25, 2021 at the church with Bishop Joseph Siegel presiding and Priests of the Diocese concelebrating. The service will be live-streamed through Facebook @HRCatholicChurch or on [email protected] Rosary Catholic Church EVV. Burial will be at St. Joseph Cemetery. Memorial contributions may be made to Holy Rosary Catholic Church, 1301 S. Green River Rd., Evansville, IN 47715, Catholic Education Foundation, 520 S. Bennighof Ave., Evansville, IN 47714 or Catholic Charities, 2111 Stringtown Road, Evansville, IN 47711. Condolences may be made online at www.ziemerfuneralhome.com.

Reverend James Richard Endress passed away Wednesday, January 20, 2021. He was born on October 12, 1934 in Evansville, IN, the youngest of six children of Edmund Endress and Emma Rastatter. He attended St. Benedict Grade School. Raised in a... View Obituary & Service Information

The family of Reverend James Richard Endress created this Life Tributes page to make it easy to share your memories.

Send flowers to the Endress family.