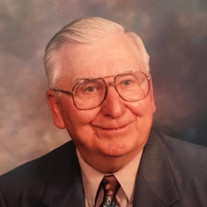 James E. Dick, age 96, of Evansville, passed away Monday, February 1, 2021 at University Nursing and Rehabilitation. Jim was a combat veteran of World War II, fighting in France and Germany, where he met his future wife, Elizabeth Grieshaber. She came to the United States and they were married at St. Matthew’s Catholic Church December 27, 1947. Jim farmed near Mt. Vernon until 1972, when he went to work for Stephan’s Implement Company, and later Wesselmann’s, both in Mt. Vernon. He suffered a severe stroke in 1998, but fought back and lived a long, productive, and loving life. His lifelong companion after the death of his wife in 1965 was Carolyn Parrish, who preceded him in death in 2010. Surviving Jim are a two daughters, Sister Mary Lou Dick of the Monastery of the Immaculate Conception in Ferdinand, Indiana and Karen Edelman of Bloomington, Indiana and her husband Paul, and one son, Steven J. Dick and his wife Terry, of Ashburn, Virginia; four grandchildren, Gregory Dick, Anthony Dick, Chris Chandler, and Mark Chandler; and six great grandchildren. Jim was the last survivor of 11 siblings. In addition to his wife Jim was preceded in death by his parents, Joseph and Theresia (Muth) Dick. Funeral service bill be at 10:00 am Friday, February 5, 2021 at Ziemer Funeral Home East Chapel, 800 S. Hebron Ave., Evansville with Father Ted Tempel officiating. With limited capacity, the funeral will be live streamed on the Ziemer Funeral Home and Cremation Facebook page. Friends may visit from 9:00 am to 10:00 am Friday prior to the service at the funeral home. A celebration of Jim’s life will be held at a later date when we are able to gather. Burial will follow in St. Matthew’s Catholic Cemetery in Mt. Vernon. The family would like to thank the staff of Heart to Heart Hospice and University Nursing and Rehab for their care where Jim lived for 10 years. Memorial contributions may be made to the Monastery of the Immaculate Conception, 802 E. 10th St., Ferdinand, IN 47532. Condolences may be made online at www.ziemerfuneralhome.com.

The family of James E. Dick created this Life Tributes page to make it easy to share your memories.

Send flowers to the Dick family.