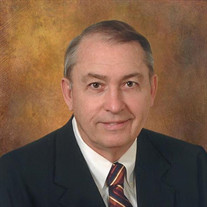 Jack Henry Kinkel, beloved husband, dad, grandpa and great grandpa left this earthly home on Sunday, March 20, 2022, for a better place in his Creator’s Heavenly Mansion which was created for Jack and all believers. Jack was born in Evansville on February 19, 1940, to the late Jack R. and Margaret (Korff) Kinkel. Jack was married to the love of his life, Linda Kaye Hays, on December 16, 1961. Together they had three children: Amy Elizabeth (Scott) Adams of Evansville, Anne Susan (Gregg) Schweir of St. Joseph, MI, and Jack Theodore or J.T. (Michele) Kinkel of Evansville. Jack is survived by one brother, Theodore (Marilyn) Kinkel of Annapolis, Maryland. In addition to his parents, he is predeceased by his older sister, Carolee Kinkel and his infant sister, Margaret Jean Kinkel. Jack and Linda were blessed with eleven grandchildren and their spouses: Rachel (Nathan) Sansing, Taylor Adams, Ellen Schuerger (Eric Nebelung), Margaret (Carl) Kay, Dorothy Adams, Ethan (Laura) Schweir, John (Kelsie) Schweir, Melanie (Taylor) Dickey, Jack Henry Kinkel II, William Kinkel and Katherine Kinkel. Jack also has seven great grandchildren, Camden Sansing, Lucy Sansing, Eloise Kay, Sophie Schweir, John Rory Schweir, Sutter Schweir, and Grayson Schweir, as well as a large and loving extended family with many beloved nieces and nephews. Jack was a graduate of Bosse High School, Culver Summer School, Evansville College (UE), and was most proud of studying Architecture at the University of Kentucky. Jack was a well-known and accomplished architect and designed many buildings in the Evansville area. He was especially privileged to work in the same office with his father (also an architect) for 35 years. Together they designed, contracted construction of and owned Belle Manor East, later converting the apartments to condominiums. In 1998, he was privileged to have his son (J.T.) join the same family firm. Jack practiced architecture a total of 55 years and received national recognition for his outstanding design of the Emge Real Estate Office. He also received recognition for his designs of the University of Evansville’s Bower Surheinrich Library and Good Shepherd Catholic Church. Other landmark buildings designed by Jack include the Indiana National Guard (Evansville), Holy Rosary and Holy Redeemer Catholic Churches, St. Luke Lutheran Church, the Student Recreation Fitness and Wellness Center at the University of Southern Indiana. He was proud to have designed nearly every modern building at Oakland City University. The EVSC, D-Patrick, Ziemer Funeral Homes, and Traylor Brothers were also valued long-time clients. Jack loved his work and his family and still found time to give back to his community. Jack served three terms as president of the Evansville Rescue Mission and was Chairman of the fundraising committee to build their Youth Care Center. He also served several terms as a member of the Evansville Philharmonic Orchestra Board of Directors, where he and Linda co-chaired a Pops Concert fundraiser, and Jack chaired and orchestrated the first River City Fair EPS fundraiser. He also chaired the Third Annual Channel 9 (WNIN) Auction. Jack was also famous for performing any variety of skits with his friends for local charity fundraisers. He was a born entertainer and loved to have fun “hamming it up.” String instruments and bluegrass music were his passion. He played guitar, mandolin, tenor banjo, five string banjo and the fiddle. He enjoyed playing music with his friends and entertaining at area nursing homes. His children and grandchildren loved for him to play the guitar or banjo any time of the year, but all will fondly remember the Christmas sing-a-longs which always concluded with a very active rendition of “The Twelve Days of Christmas” and “We Wish You a Merry Christmas.” Jack wrote and performed original ‘ditties' for many special family occasions, especially his children’s and grandchildren’s wedding rehearsals. He will forever be known for his original song entitled, “Get Off of Grandma’s Bed,” a Kinkel family favorite! Jack loved a good party and was the “K” in a rather infamous birthday group, the self-named MOKAZ. He and the other members, Mary Jane Miles, Rosemary O’Daniel, Jane Annakin and Ted Ziemer celebrated their consecutive February birthdays together for over 50 years. And, yes, there was a song for that, too! (ZAKOMs, you are loved dearly as well, and Jack would want Pat, Linda, and Clare to keep the party rolling for Jane!) Jack was a longtime member of Christian Fellowship Church where he served one term as a Trustee and prior to that had been a lifelong member and leader of Redeemer Lutheran Church, which was designed by his father. Jack’s family would like to thank the many doctors and caregivers who walked with him through his Parkinson's Disease and Glaucoma journey. They include, but are not limited to Dr. Stephen Koewler and staff, Dr. Omar Dukar, Eye M.D and staff, Dr. Michelle Oglesby and staff, and the numerous caregivers who treated him with such love and dignity: Paula, Denise, Julie, MaryAnn, and Kat. His road would have been much rougher and a lot less fun without the five of you! Lastly, we thank the incredible nursing staff at AseraCare Hospice, most especially Sallie, Nicole, Angie and Robyn. Ziemer Funeral Home has been entrusted with Jack’s final party. Visitation is scheduled for Friday, March 25, 2022 from 4:00 p.m. to 7:00 p.m. at Ziemer Funeral Home East Chapel, 800 S. Hebron Avenue. The celebration of Jack’s life will continue at 1:00 p.m. Saturday, March 26, 2022 at Christian Fellowship Church, 4100 Millersburg Road. A funeral service will begin at 2:00 p.m. with Pastor Dale Beaver officiating. Burial will follow at Evansville Lutheran Cemetery. If you would like to make a donation in Jack’s honor, please consider Christian Fellowship Church, 4100 Millersburg Rd., Evansville, IN 47725 in honor of the Upper Room Class or the YMCA - Rock Steady Boxing, 16 Court St, Evansville, IN 47708, with Jack Kinkel written in the memo line for either group. Condolences may be made online at www.ziemerfuneralhome.com.

Jack Henry Kinkel, beloved husband, dad, grandpa and great grandpa left this earthly home on Sunday, March 20, 2022, for a better place in his Creator&#8217;s Heavenly Mansion which was created for Jack and all believers. Jack was born in Evansville... View Obituary & Service Information

The family of Jack Henry Kinkel created this Life Tributes page to make it easy to share your memories.

Send flowers to the Kinkel family.