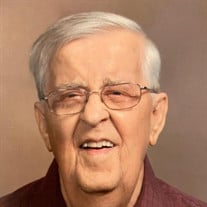 Jack R. Hajek, 88, of Evansville, passed away Saturday, March 6, 2021 at his home. He was born September 6, 1932 in Chicago, IL to the late Ralph and Carrie (Risberg) Hajek. Jack was a 1951 graduate of Bosse High School. He was a member of the Insulators Local #37 for over 41 years. He was a 4 year veteran of the US Air Force serving in Korea, and was a member of the VFW and Disabled American Veterans. Jack was a former member of Nativity Catholic Church where he and his wife received the Brute’ Society Award for their dedicated service. He is presently a member of Holy Rosary Catholic Church. Jack was an avid St. Louis Cardinals baseball fan and enjoyed being with his children, grandchildren, and great-grandchildren. He is survived by his wife, Shirley (Woods) Hajek of 64 years; daughters, Sherry (Malcolm) Gwinn of Evansville, Gloria (Ed) Hibbard of Newburgh, and Jackie (Jeff) Ross of Mt. Vernon; son, Steve (Lisa) Hajek of Wadesville; grandchildren, Cameron Gwinn, Courtney Smith, Shirley DelMoro, Wally Hibbard, Mary Felton, Jenna Rogers, Justin Ross, Ciara Englert, Candy Nurrenbern, Connie Hajek; and 16 great-grandchildren. Jack was preceded in death by his parents; grandson, Jerimiah Ross; and brothers, Ralph and Donald Hajek. Visitation will be from 9:00 a.m. – 10:45 a.m. Thursday, March 11, 2021 at Ziemer Funeral Home East Chapel 800 S. Hebron Ave. A prayer service will begin at 10:45 a.m. at the funeral home followed by a Mass of Christian Burial at 11:00 a.m. at Holy Rosary Catholic Church, 1301 S. Green River Rd., with Fr. Henry Kuykendall and Fr. Bernie Etienne officiating. Burial will be at St. Joseph Cemetery. Memorial contributions may be made to The American Cancer Society-Indiana Chapter, 5635 N. 96th Street, Suite 100, Indianapolis, IN 46278 or Holy Rosary Catholic Church, 1301 S. Green River Road, Evansville, IN 47715. The funeral mass will be livestreamed on Ziemer Funeral Home and Cremation Services Facebook page. The family would like to thank Heart to Heart Hospice for their special care of Jack. Condolences may be made online at www.ziemerfuneralhome.com.

Jack R. Hajek, 88, of Evansville, passed away Saturday, March 6, 2021 at his home. He was born September 6, 1932 in Chicago, IL to the late Ralph and Carrie (Risberg) Hajek. Jack was a 1951 graduate of Bosse High School. He was a member... View Obituary & Service Information

The family of Jack R. Hajek created this Life Tributes page to make it easy to share your memories.

Send flowers to the Hajek family.