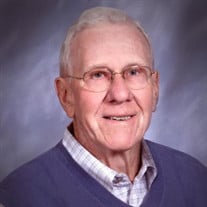 Hugh P. Ahlering, 88, of Evansville, passed away Thursday, November 19, 2020 at the Evansville Protestant Home. He was born June 17, 1932, in Evansville, to the late Raymond and Elizabeth (Gerbig) Ahlering, Sr. Hugh graduated from Bosse High School and served in the United States Army during the Korean War. He graduated from the University of Evansville in 1961 with a degree in engineering and played basketball for 4 years, playing on the national championship team of 1959. Hugh worked for Peyronnin Construction Company for over 50 years retiring in 2016. Hugh was an active member of Annunciation Parish - Christ the King Church for over 60 years. Hugh is survived by daughters, Mary (Robert) Rock, Julie (Frank) Ehrensbeck, Jean Carlson, Margie Ahlering (William Hall) and Catherine Kline; 10 grandchildren; nieces and nephews. In addition to his parents, Hugh was preceded in death by his wife, Carol Ahlering in 2015; grandson, Riley Carlson; brother, Raymond Ahlering; sisters, Katherine Beach and Virginia Hess. Due to the pandemic, private services will be held Tuesday, November 24, 2020 at Christ the King Catholic Church, Fr. Alex Zenthoefer officiating. Burial will be at St. Joseph Cemetery. In lieu of flowers, memorial contributions may be made to Annunciation Parish - Christ the King Church, 3010 E. Chandler Ave., Evansville, 47714 or a charity of your choice. Condolences may be made online at www.ziemerfuneralhome.com.

The family of Hugh P. Ahlering created this Life Tributes page to make it easy to share your memories.

Send flowers to the Ahlering family.