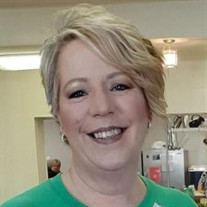 Holly E. Richard, 54, of Tell City, IN, passed away Tuesday, May 4, 2021 at Deaconess Gateway Hospital. She was born June 8, 1966 in Tell City, IN to the late Duane and Wilma “Billy” (Graves) Richard. Holly graduated from Tell City High School and Roger’s Hair Academy. She was a bartender and server at Marcy’s in Leopold, IN. Holly loved working with people and never met a stranger. She enjoyed all the time spent with her good friend, Susan, whom she could always count on to be there for her at any time. Holly loved music and going to concerts. She was a loving mother and grammy. Holly is survived by her daughter, Kaylyn Young (Neil); granddaughter, Emma Young; grandson, Beau Young; sister, Cathy Taylor (Duane); brothers, David Richard (Nikki), Roger Richard, and Rick Richard (Pam); and one niece and eight nephews. In addition to her parents, Holly was preceded in death by her brother, Scott Richard and sister, Susan Dupre. There will be no services at this time. Ziemer Funeral Home East Chapel, 800 S. Hebron Avenue, is handling the arrangements. In lieu of flowers, memorial contributions may be made to Chemo Buddies, 3700 Bellemeade Ave., Suite 118, Evansville, IN 47714 or Susan G. Komen Evansville Tri-State, 4424 Vogel Rd #205, Evansville, IN 47715. Condolences may be made online at www.ziemerfuneralhome.com.

The family of Holly E. Richard created this Life Tributes page to make it easy to share your memories.

Send flowers to the Richard family.