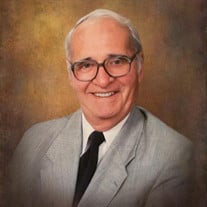 Gordon “Pat” Manis, 91, of Evansville, passed away Tuesday, November 2, 2021 at the Linda E. White Hospice House. He was born February 28, 1930 in Lafayette, Indiana to the late Walter and Helen (Henderson) Manis. Pat was a graduate of Lafayette Jeff High School and Indiana University earning a BA in Business. He was a member of Sigma Alpha Epsilon fraternity where he met his future wife Jayne Maglaris while at a Greek mixer. They were married in 1951 and celebrated their 70th wedding anniversary this year. After graduation they moved to Pasco, Washington where they resided while he served in the US Army. He was stationed at Camp Hanford, Washington for three years where he was a Personnel Specialist and was awarded the National Defense Service Medal. After his discharge from the Army in 1956, Pat and Jayne returned to Evansville where they began a family. They are the proud parents of two beautiful daughters, Marci and Tracey. Once back in Evansville, they took over the family business, Crescent Cleaners which they operated until 2015. Pat was a member of Eastminster Presbyterian Church for over 60 years and Rolling Hills Country Club for 56 years where he was an avid golfer. He was also a member of the Evansville Jaycees and Jaycee Old Timers, Evansville Quarterback Club and American Legion Kapperman Post #44. For many years, he enjoyed vacations with family and friends in Longboat Key, Florida where he spent many happy times teaching his daughters to swim and dive. He is survived by his wife Jayne (Maglaris) Manis, daughter, Marci Manis Taschler of Avon, Indiana and nephews Steven and Robert Manis. In addition to his parents, Pat was preceded in death by his daughter, Tracey Manis, brother, Walter D. Manis and beloved dog, Crackers. The family would like to extend their heartfelt appreciation to the doctors and nurses who took care of Pat while at Deaconess Gateway Hospital in Newburgh. They would also like to thank their many friends for their love and support as well as Pastor J.T. Silence. A Celebration of Life service will be held at Eastminster Presbyterian Church on Wednesday, November 10th starting with a gathering of friends for coffee and conversation at 10am followed by a memorial service at 12 noon. After the service, Pat’s family would like you to join them in the Church Fellowship Hall for a casual lunch buffet. For those considering a way to honor Pat, we suggest donations may be made to Eastminster Presbyterian Church, 5501 Washington Ave., Evansville, Indiana 47715, or a cause important to you. Ziemer Funeral Home – East is handling arrangements where online condolences may be made at: www.ziemerfuneralhome.com.

The family of Gordon "Pat" Manis created this Life Tributes page to make it easy to share your memories.

Send flowers to the Manis family.