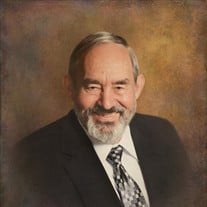 Gerald &#8220;Jerry&#8221; Thomas Seng, 85, died on Sunday, October 17 at his home in Evansville. He was born January 27, 1936, in Jasper to Carl and Marcella (Bohnert) Seng. He was born nearly two months premature, at the family home during... View Obituary & Service Information

The family of Gerald "Jerry" Thomas Seng created this Life Tributes page to make it easy to share your memories.

Send flowers to the Seng family.