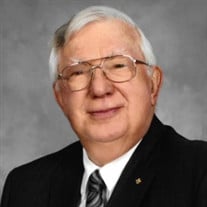 George William “Bill” Spice passed away in Austin, Texas on June 24, 2021, due to complications from a stroke he suffered on June 14. Born in Ft. Wayne, Indiana, Bill graduated from Ball State Teachers College and served a long successful career in the Boy Scouts of America, including tenures as a Scout executive, area director, and the BSA’s director of high adventure. He left a legacy of transformation during and after his career which made an impact on countless lives. In 1960, Bill began his career in Scouting in Ft. Wayne, Indiana and in 1974 he accepted the position as Scout executive of the Buffalo Trace Council in Evansville, Indiana. Faced with declining revenues, Bill formed a partnership with the Weaver Popcorn Company in 1980 and thus began the annual sales of Trail’s End popcorn. To date, over $5 billion dollars have been raised to support Scouts and Scouting. In 1982, Bill was awarded Sagamore of the Wabash, the highest honor for which the Governor of Indiana bestows for distinguished contributions to the Hoosier state. From 1993-2000, Bill was the BSA’s director of high adventure and the general manager of the Philmont Scout Ranch in Cimarron, New Mexico. His vision and leadership increased attendance at Philmont which sold out two years in advance. Bill was a presence in the local community as well and he grew relationships into lasting friendships with all who knew him. After his retirement Bill continued to support high adventure and led fundraising campaigns for new facilities including the Silver Sage Staff Activity Center at Philmont. Among his many honors for service, Bill was awarded the Order of the Arrow’s Distinguished Service Award and the Philmont Staff Association’s Silver Sage Award. He received the Silver Beaver Award for his post-retirement Scouting service, and the St. George Emblem from the National Catholic Committee on Scouting for his service to Catholic Scouting. A true servant leader, Bill was at the center of the transformation for many decades with his church community at St. Paul’s Episcopal Church in Evansville, Indiana where he was a long-standing member of the vestry, Senior Warden and led multiple fundraising efforts. Bill’s outgoing personality and presence will long be remembered by all who had the pleasure to know him. He is survived by his wife of 63 years, Sandra, son, Tim Spice, daughters, Beth Spice and Mariann Sabolic. Bill was the ultimate grandpa to Jeremy, Meghon, Charles, Connor, Austin, and Clayton. And great grandpa to Alexis, Bayleigh, Mahala, and Maddox. A memorial service will be held on August 7 at noon at the Buffalo Trace Council Scout office, 3501 E. Lloyd Exp. Evansville, Indiana. To continue Bill’s life-long commitment to scouting, the family is asking that you honor his legacy by contributing to the Buffalo Trace Council Endowment fund in his name. Donations can be made by visiting www.buffalotracecouncil.org and click on the “Bill Spice Memorial Fund” link. Arrangements are being handled by Ziemer Funeral Home East Chapel, 800 S. Hebron Avenue, Evansville, IN 47714. Condolences may be made online at www.ziemerfuneralhome.com.

George William &#8220;Bill&#8221; Spice passed away in Austin, Texas on June 24, 2021, due to complications from a stroke he suffered on June 14. Born in Ft. Wayne, Indiana, Bill graduated from Ball State Teachers College and served a long... View Obituary & Service Information

The family of George William "Bill" Spice created this Life Tributes page to make it easy to share your memories.

Send flowers to the Spice family.