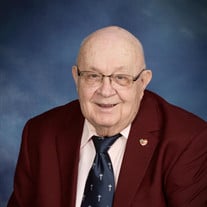 George Welden, 87, left this world to be with his Lord and Savior on February 1, 2021 at the North Park Nursing Center. George was born January 13, 1934, in Howell, to George V. and Venita Welden. He graduated from Daniel Wertz Elementary, 1948, and Reitz High School, 1952. He was a member of the Reitz photo club and continued that interest throughout his life. He began working for Koch Photography right after graduation, leaving to join the Army in April 1953. George was in the Army during the Korean War, and was trained at Ft. Monmouth, NJ, in specialized photography. He was stationed at Ft. Richardson, Alaska, and belonged to the 42nd Engineering Battalion as a Still Photographer. He left the Army in April 1956 as a Corporal. He earned the National Defense Service Medal and the Good Conduct Medal, and had a notable photography mission through Ft. Eustis, VA. He returned to Evansville and began working with International Harvester. When IH sold to Whirlpool, he joined Whirlpool’s Army Ordnance division and took photos of army ordnance in action. Once the Ordnance division closed he became a general photographer at Whirlpool, photographing refrigerators for engineering research. He also worked with the printing presses and retired as a timekeeping accountant after nearly 40 years of service. His love for photography inspired him to start his own business, Welden Photography. The business lasted for 50 years. He specialized in weddings, and photographed more than 1,000 weddings, plus portraits, class reunions, etc. He was a man of faith, and a former member of the Westside Christian Church, Victory Baptist Church, Calvary Baptist Church, and current member of Grace Baptist Church. He was a past member of the Masonic Lodge, Scottish Rite, York Rite, White Shrine and Gideons International. He is a current member American Legion, Funkhouser Post #8. He and his late wife Bettye spent 50 years holding services at many nursing centers in Evansville, including the former Rathbone home. George was preceded in death by his parents, George V. and Venita; his wife of 63 years, Bettye; his sisters, Barbara Ann Welden and Mary Alice Hill; brothers-in-law, Don Hill and Henry Cruz; sister-in-law, Faye Cruz; grandson, Brian Welden and nephew, Stan Frankenberger. He leaves behind his children, Janey (Fred) Frayser and Tom (Julie) Welden; granddaughters, Darla (Mike) Chapman and Tessa (Gene) Lechner; granddaughters in love, Tiffany Basham and Amy Wyman; and great-grandchildren, Max, Tyler, and Landrie Chapman and Cristian and Juliet Welden. Visitation will be held on Wednesday, February 3, 2021, from 4:00 PM to 7:00 PM at Ziemer Funeral Home North Chapel, 6300 N. First Avenue. Funeral Services will be held at the funeral home on Thursday, February 4, 2021 at 10:00 AM, with burial at Park Lawn Cemetery. The family would like to thank the staff at the Holiday Retirement Village and at North Park Nursing Center for their wonderful care of George. In lieu of flowers, contributions can be made to Grace Baptist Church, 1200 N. Garvin St., Evansville, IN 47711, and to the IMB, 3806 Monument Avenue, Richmond, VA 23230, specified for the Sauter Deaf Ministry. Condolences may be made online at www.ziemerfuneralhome.com.

George Welden, 87, left this world to be with his Lord and Savior on February 1, 2021 at the North Park Nursing Center. George was born January 13, 1934, in Howell, to George V. and Venita Welden. He graduated from Daniel Wertz Elementary,... View Obituary & Service Information

The family of George Welden created this Life Tributes page to make it easy to share your memories.

George Welden, 87, left this world to be with his Lord and Savior...

Send flowers to the Welden family.